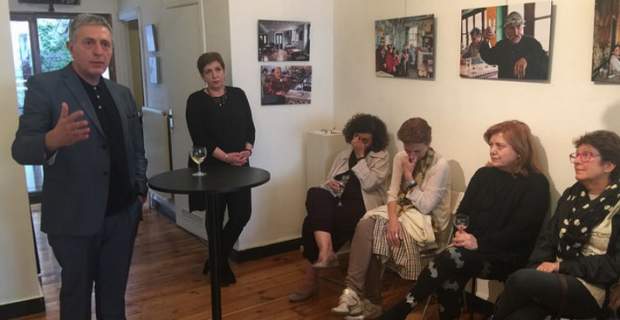 The history of Greek cafes captured through the lens of George Pittas is featured at the Theorem Gallery in Brussels. The display marks the start of events organized by MEP Stelios Kouloglou on June 27-28 to promote Greek products and support Greek entrepreneurship.

The events are held in collaboration with the NGO, “A Discovering Network,” that is based in Brussels and aims to showcase Greek products at a European level, as well as the Greek Gastronomy Guide, a platform for Greece’s cuisine.

Kouloglou said that the initiative is part of a strategic framework that he has put into effect until the end of his tenure at the European Parliament so as to help recharge the Greek economy and generate employment. “In Greece, at this moment, there are a large numbers of young businesses with exceptional and innovative orientation and we need to help them so that they can begin to export,” he said. “There have already been a number of activities at the European Parliament for youthful entrepreneurship and combatting unemployment, and social exchange, through the cultivation of textiles and medical cannabis in Greece, but more will follow.”

Over the two-day events, a number of companies were chosen to present their local products that include ouzo, tsipouro, beer, olives, spoon sweets, and even draughts and worry beeds. All these products are associated with Greek traditional kafeneion (cafes). The initiative not only helps promote entrepreneurship, but it also works to highlight Greek traditional life to a European audience.

The art display runs at the Theorem Gallery until June 27, when there will be local Greek products offered to guests. On June 28, the photo display will move to the European Parliament where it will stay until July 1. There will also be a book presentation, titled “Cafes of Greece.”