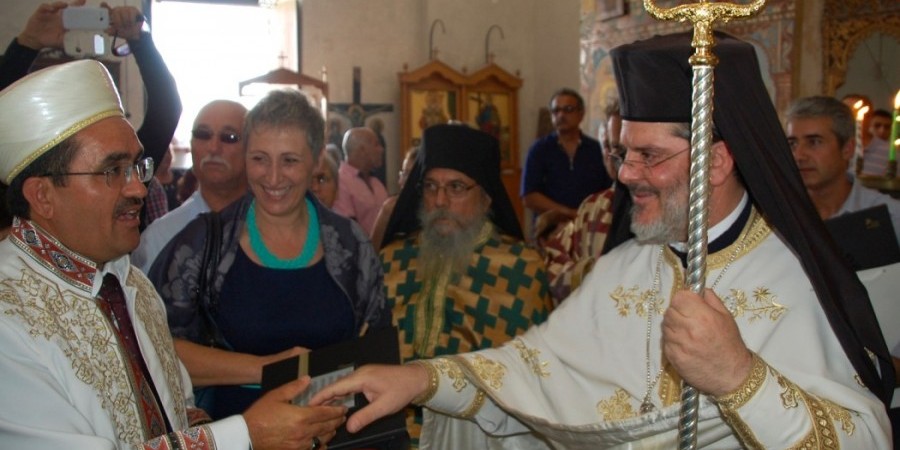 On the occasion of the feast of Apostle Barnabas, known as the founder of the Church of Cyprus, faithful Greek Orthodox patrons visited and prayed on Saturday at the main Cathedral of the historic monastery dedicated to Apostle Barnabas during an annual pilgrimage, currently used as an icon and archaeological museum by the Turkish Cypriots.
According to a press release issued by the Office of the Religious Track of the Cyprus Peace Process (RTCYPP), as a sign of mutual respect and within the framework of the RTCYPP, the Mufti Dr. Talip Atalay sent his representative to bring greetings of goodwill to the Christian faithful and to Chrysostomos II, Archbishop of the Church of Cyprus.
This follows a gesture of good will by Archbishop Chrysostomos II in 2015 when he sent his representative to greet the Muslim faithful of Turkish origin at a special pilgrimage to Hala Sultan Tekke on the occasion of Eid Ul Adha or Qurban Bayram as it is known in Cyprus.
A small delegation of Ambassadors and country representatives from Austria, Finland, Ireland, USA and France joined the Swedish Ambassador and the Office of the Religious Track of the Cyprus Peace Process (RTCYPP) as a sign of their support to the religious leaders’ dialogue for peace in Cyprus and an affirmation of their efforts for the respect of freedom of religion or belief.
The religious leaders reiterated their conviction that freedom of religion is not only part of the Universal Declaration of Human Rights and the Convention for the Protection of Human Rights and Fundamental Freedoms of the Council of Europe it is also part of the teachings of Christianity and Islam.
“We remain hopeful when we see that the religious leaders of Cyprus irrespective of religion and dogma, express their respect for each other’s faith and places of worship, support free access to all religious institutions and accept each other’s differences, culture and religion as a richness,” says Salpy Eskidjian, Executive Coordinator of the RTCYPP.
Apostle Barnabas was born in Cyprus and was stoned to death in Salamis in 45 AD. He is described as ‘a good man, full of the Holy Spirit and of faith’ (Acts 6:24). Barnabas, means ‘son of consolation’ or ‘man of encouragement.’ Although Barnabas was not among the original Twelve Apostles, he is traditionally thought to have been among the 72 commissioned by Jesus to preach; thus, he is given the honorary title of Apostle. He is considered the founder of the Church of Cyprus, the press release concludes.
(Source: CNA)