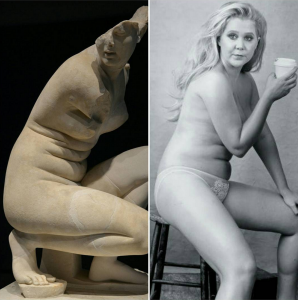 Amy Schumer recently went semi-nude for Pirelli’s 2016 Calendar and has received much criticism regarding her body image. She originally posted the photo for which she was topless with the caption, “Beautiful, gross, strong, thin, fat, pretty, ugly, sexy, disgusting, flawless, woman.”

Schumer’s stance against “body shaming” inspired one of her followers named Whitney who created side-by-side images of Schumer and a sculpture of “Crouching Aphrodite,” dating back to the 2nd or 3rd century B.C.

“The goddess of beauty is portrayed here with stomach rolls and doesn’t have a perfectly smooth, toned body,” Whitney wrote.

“I want to remind everyone that they do not have to be a Victoria’s Secret model to be a beautiful goddess with a beautiful body.”

She them added, “Your body is not bad, ugly, or wrong. Embrace your inner goddess.”

Touched by her fan’s reaction, Schumer re-shared the photo on her Instagram thanking Whitney yesterday.