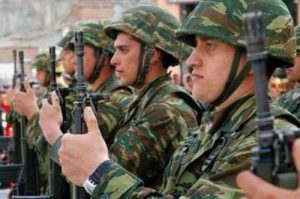 In Greece, conscription, or mandatory military service for men between the ages of 19-45 has been an active protocol since 1909. Over the years the length of time of the obligatory military enrollment has varied, but somethings have remained constant.
Nowadays, the official mandate states that military service must last between 9-12 months. Most Greek men serve out their sentence after completing high school at the age of 19. They experience a number of time-honored hazing rituals upon arrival to their posts. Although they do not result in anyone’s death or injury, they are what one might call “pranks gone wild.” Let’s look at some of the more common experiences young men have as they fulfill their mandatory military service in Greece.
During one of the initiation ceremonies for the Special Forces, there is a hazing ritual called “the nausea.” Basically, during the first weeks of duty, after finishing eating their main meal, the entire unit of newbies is instructed by their senior officers to exercise until someone vomits their recently consumed meal. Many times, this causes a chain reaction of nausea throughout the unit and everyone “tosses their cookies,” to put it nicely.
Other rituals involve cleaning up messes rather than making one. “Spring cleaning” involves newspapers and bottles of cleaning spray. The new recruits are instructed by their senior officers to clean the windows outside of the building — in the rain. Of course, this exercise in futile and frustrating, but at least no one is throwing up.
If you have ever wondered what kind of training and conditioning the Evzones, or Presidential Guards, go through, here’s the answer. These newbies training to become members of the elite unit that guards the Greek Tomb of the Unknown Soldier, the Presidential Mansion and the gate of the Evzones camp in Athens must stay completely motionless and at attention for long periods of time. Recruits undergo a ritual called “the codfish,” where they must stand motionless and at attention for a half hour while three senior recruiters try to provoke them by slapping them on the face and neck (thus the codfish reference). They even cover their entire heads and faces with shaving cream trying to provoke a reaction.
Probably the most disgusting hazing ritual, “the toothbrush,” involves cleaning toilets with your toothbrush. Basically, anytime that a senior officer inspects the chambers, newbies hold their breaths in hopes that they will not come across any stains or soiling in the toilet bowls and showers. If the inspector finds anything less than top-notch cleanliness, the soldiers must clean the toilets and showers with their toothbrushes!