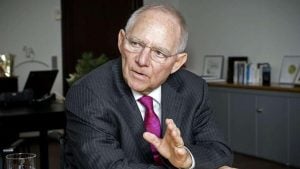 German Finance Minister Wolfgang Schaeuble ruled out another financial crisis for Greece. Speaking ahead of the Group of Seven finance ministers meeting with central bankers in Sendai, northern Japan, Schaeuble said on Thursday that he was confident that the Eurogroup of Eurozone finance ministers would come to an agreement during the meeting on Tuesday, May 24. He said that he had already spoken to International Monetary Fund (IMF) Chief Christine Lagarde regarding the Greece, which hopes to unlock aid from international creditors (European Commission, European Central Bank, European Stability Mechanism, IMF).
A rift between the EU and IMF over Greece’s progress has resulted in long delays to the bailout review, but Schaeuble says he is “optimistic” that there will be no new crisis.
On Wednesday, the Greek Radical Left Coalition (SYRIZA) government — in response to lenders demands — presented a bill in Greek Parliament with a new round of crippling measures to raise tax (again), sell off non-performing loans and set up a new privatization fund with creditors in return to bailout funds.