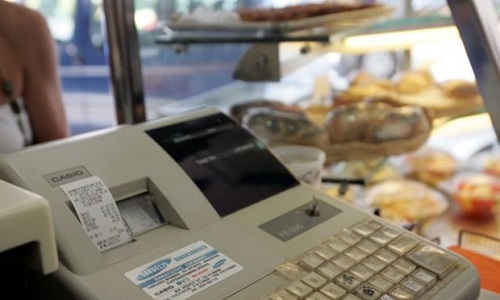 Despite the fact that the Greek government burdened the already tax-laden citizens with more taxes, a new bill opens the door to tax evasion.
The bill 4337/2015 that passed last October, abolishes the separate fines for violations of not issuing or issuing false tax information to small businesses while minimizing the separate fines from 250 to 500 euros per unissued tax document for sales of goods or services up to 30,000 euros.
Since October 17, when the law was put into effect, the auditors of the Public Revenue Inspectorate (Y.E.D.D.E.) and Tax Office doing spot checks on businesses and freelance professionals, may no longer impose any fines on businesses that have not issued receipts or other tax information. The only penalty they can impose on businesses and freelancers is 50% of the VAT not paid to the state.
Analysts say that — given the new heavy taxes — this is like an invitation to tax evasion. For instance, tourist businesses — the core of Greek economy — can easily evade taxes since the previously high fines for not issuing receipts do not apply anymore. The same applies to professionals such as doctors, lawyers, engineers and so on.
At the same time, previously announced measures to battle tax evasion never materialized. For instance, the proposed incentive of tax reductions to citizens who make electronic payments — meaning the transactions are recorded, thereby there can’t be tax evasion — never went into effect.
The Guardian: Tax hikes affect Greek coffee drinkers
British newspaper The Guardian reports rather caustically on the new taxes, levies, excise duties and indirect taxes the Greek leftist government is imposing on financially burdened Greeks.
Coffee, beer, hotel bookings, fuel, petrol, heating oil, natural gas, cable television, landlines and internet broadband connections are subject to more taxes, the article says. At the same time the VAT hike from 23 to 24% will raise the prices of every good and service.
“Prime minister Alexis Tsipras’ reliance on taxation has not only infuriated the business community but also lenders, many of which believe they will thwart economic recovery,” the Guardian article says.
The Guardian also reports the recent OECD study that shows Greece exceeds other European Union countries in taxation on small and medium-sized businesses, forcing an increasing number of firms to relocate abroad.