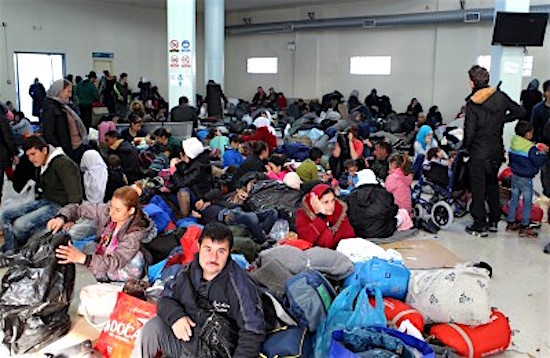 The steady stream of refugees arriving on Greek islands from Turkey in recent days has been a cause of concern for the Greek government.
In the past week there has been an average of 100-120 migrants and refugees landing on Aegean islands close to Turkey, when the arrivals were almost non-existent when the implementation of the agreement between Ankara and the European Union to curb the refugee flow was working smoothly.
However, the political developments in Turkey and the refusal of certain EU member states to satisfy the excessive Ankara demands have put the agreement in the air.
Turkish President Recep Tayyip Erdogan has fired Prime Minister Ahmet Davutoglu, the man who was the deal negotiator between Ankara and Europe. Now Erdogan threatens that the deal is off unless the EU abolishes visa requirements for Turkish citizens who wish to travel to Europe.
The agreement dictates that Athens can return to Turkey one Syrian refugee who has arrived in Greece illegally for every Syrian refugee that Ankara sends directly to another European state. If the agreement ceases to exist, tens of thousands of refugees will end up stranded in Greece.
However, there are people within the Greek state who also refuse to comply with the deal, claiming that Turkey is not a safe country. As a result, migration authorities have given migrants the option to apply for asylum in Greece, meaning that they cannot be sent back to Turkey before their application is cleared. Even in cases where they are not granted asylum, the refugees file an appeal, thus extending the period they stay in Greece.
As a result, the number of registered migrants increases by about 100 everyday. The registration centers on the five Aegean islands are already overcrowded, with many refugees and migrants living in squalid conditions and rebelling against the migration authorities.
At the same time, about 10,000 migrants remain at the makeshift camp at Idomeni, at the border between Greece and the Former Yugoslav Republic of Macedonia, and 1,500 at Piraeus Port. Greek authorities have been unable so far to transfer migrants to proper hospitality facilities.