What Greece Gained (and Lost) in Monday's Eurogroup 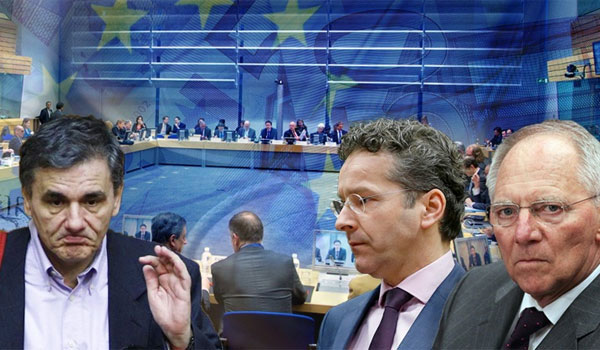 The celebratory tones with which the Greek government announced the outcome of Monday’s Eurogroup are like the celebration after the voting of the new austerity measures in parliament. It is the case of celebrating a failure because a bigger failure is avoided. Like a football team losing a game 2-0 instead of 4-0. The first would be a defeat. The second, humiliation.
On Monday’s meeting of euro zone finance ministers, the Greek government avoided legislating now the contingency measures asked. However, it agreed to cut salaries and pensions in the public sector if it fails to reach fiscal targets.
For Alexis Tsipras and his group avoiding to legislate the contingency measures is presented to the Greek people as a victory. They didn’t say a word about the fact that creditors did not even offer any debt easing. And debt relief was what the SYRIZA-ANEL coalition was promising since day one of the negotiations.
The only promise on debt easing they got from Greece’s European partners was that it will be decided in 2018 upon successful completion of the bailout program, “if necessary.”
It is the “2018” and the “if necessary” that Finance Minister Euclid Tsakalotos conveniently forgot to include in his victorious announcements.
Let’s save the celebrations though for the May 24 scheduled Eurogroup where the actual decision on Greece’s bailout program progress review will be taken. It is very likely that creditors, and the International Monetary Fund in particular, will ask for more measures before they sign the bailout review agreement.
What does this mean in practice? According to Eurogroup chief Jeroen Dijsselbloem, the disbursement of the next loan tranche is linked to the implementation of specific measures and reforms and the condition that the IMF will participate financially in the program.
In other words, if the IMF refuses to sign the review, Greece cannot get one cent. And as state coffers are nearly empty again and loan repayments due until July are close to 4 billion euros, it is easy to understand how important the 5.7-billion-euro tranche is.
Regarding the avoidance of legislating contingency measures, there is a gray area. In May 2017, when the Greek economy will be audited, if fiscal targets are not met, then the mechanism to cut salaries and pensions will go into effect. In that case, the precautionary measures will become permanent because they will be included in the 2018 budget.
So it’s better for Mr. Tsipras and his company to put the corks back on the champagne bottles. No matter how hard work that is.

Rain — Not Snow — Could Become the Norm in the Arctic