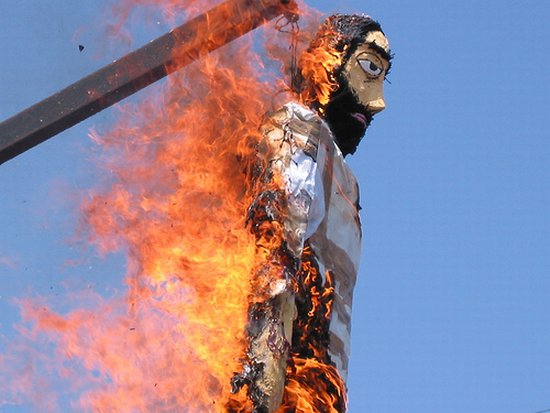 The Greek Jewish community is incensed by websites and brochures of the Greek National Tourism Organization (GNTO) that showcase the traditional Easter practice known as “Judas burning.” The time-honored “scapegoating” ritual burns an effigy of Judas Iscariot to rid the community of evil, however the Central Board of Jewish Communities in Greece has taken affront to the public promotion of the practice.
“This custom perpetuates anti-Semitic feelings and it is characteristic that in other European countries it has almost vanished,” says a letter sent to the GNTO that supports the practice on its website and in a brochure handed out by the Greek Embassy in Washington DC. “We have repeatedly turned to the authorities, demanding that, in our country too, this custom be abolished.” The same letter notes that despite it being described as an Easter practice, it had been condoned by the Greek Orthodox Church for more than a century.
Jews take affront to the practice as it is viewed as maintaining the long-held view that Jews killed Jesus, a source of anti-Semitism. The practice is sometimes referred to as the “burning of the Jew.”