The Symbolism of Roasted Lamb on Greek Easter 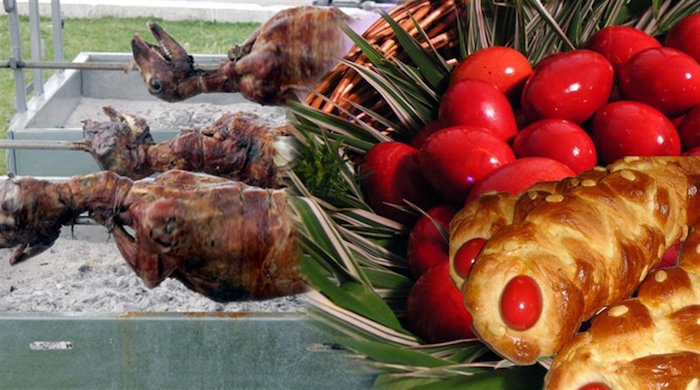 For Greek people, the roasted lamb, slowly cooking on the spit on Easter Sunday, is not only a mouth-watering delicacy but it also carries rich symbolism.
The origin of eating lamb on Easter comes from the Jewish Passover and is associated with the exodus from Egypt.
Before the Jews set out on the great exodus, God, through Moses, told them to gather in small groups and each family to sacrifice lamb. With the animal’s blood they were to paint their doorposts so they were not exterminated by the angel of God, who on that night would bring pestilence to the firstborn of each family who would not mark the entrance to their house with the lamb’s blood.
That night, each family offered as a sacrifice to God a lamb for the salvation of all people. They ate the lamb, without breaking its bones, together with unleavened bread and bitter herbs. With the lamb’s blood, they stained their doors.
Later, Christians adopted the sacrificial lamb as John the Baptist likened Jesus Christ to the lamb of God who will take the brunt of the sins of the world with his sacrifice.
In most parts of Greece, on Easter Sunday the faithful roast a lamb on the spit along with the intestines.
In the afternoon, Greek Orthodox Christians go to church for the Vespers of Love. They share a fraternal embrace reading the Gospel in different languages. On Easter Sunday and 40 days on, Orthodox Christians greet each other saying, “Christ is Risen” and answer, “Truly He is risen.”