Frustration Builds as Hopes Dim Among Refugees at FYROM Border 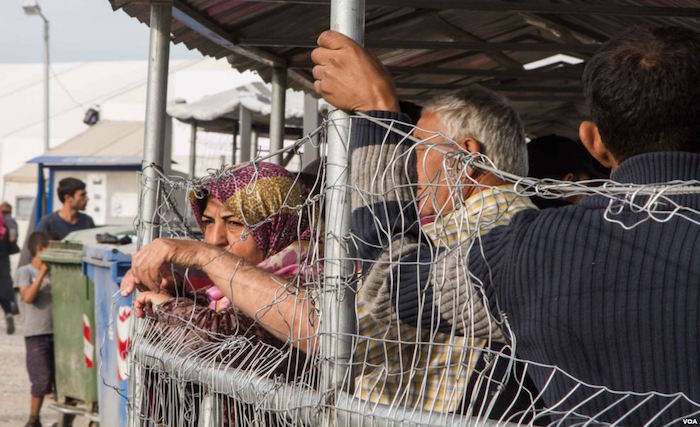 The biting cold of the winter wind has been tempered by spring, but among the thousands trapped in limbo on the Greek border, it is the rumors that now swirl through Idomeni camp.
“They say that maybe the border will open at the end of this month, but it’s just people talking,” said Qusay Lubani, one of around 12,000 people living in the sprawling, makeshift camp by the village of Idomeni.
“People are always talking about such things here,” he added, “and it’s because people are despairing in this situation.”
It has been well over a month since FYROM closed the door on refugees arriving from Greece.
Since then, Idomeni has seen desperate efforts to cross the border repelled by tear gas and protests. And as hopes dim, frustration grows.
Cut off
“The camp feels like a jail to me,” said Lubani, a Palestinian Syrian, who arrived in Idomeni two months ago with the dream of traveling to Norway with his wife, Salwa. “We’re stuck here and no one is talking to us. We need something to change.”
Before the FYROM border restricted the flow of people and finally sought to cut it off altogether, Idomeni was a brief stopping point for refugees traveling through the Balkans into the rest of Europe.
But following the closure, many decided to wait it out, and despite the efforts of non-government organizations and volunteers, conditions are poor for those who remain.
Syrians make up the majority of those living here, but Kurds, Iraqis, Afghans and Pakistanis are among the nationalities braving sub-standard conditions.
A few families have managed to take up residence in the cabins of a few old trains rotting on the railway line that is now blocked by riot-ready police vans.
Many others, like Mahmoud Ammar, have set up camp between the tracks.
Ammar told VOA that his son, a civilian, died under barrel bombs of the Syrian Army.
A diabetic with poor eyesight and with a family of eight to care for, Ammar struggles to keep his vital shots of insulin cold enough to prevent them from spoiling.
“I cannot move from here” he said, his voice barely above a whisper. “There’s no money left and I don’t know what to do.”
Waiting for news
Like Ammar, many refugees are resigned to waiting for good news that may never come.
They hope, against the odds, that Europe’s rapidly shifting policies will shift once again, this time in their favor.
Emmanuel Massart, a field coordinator for Medecins Sans Frontiéres working in Idomeni, told VOA that conditions in the camp are “far below acceptable international standards.”
But much of the growing frustration comes from not knowing what will happen next.
“They don’t have any information on when and if the border will open or not,” he said.
Earlier this month, efforts by a few refugees to cross the border were met with tear gas and rubber bullets from FYROM police.
Since then, the death of a Kurdish man fatally injured by a police truck — thought to have been an accident — sparked protests.
Meanwhile, fights between small numbers of refugees from different ethnic groups, often prompted by arguments over food, continue to be a problem.
And as pressure builds within Idomeni, so do efforts by the Greek government to move the 50,000-plus refugees trapped within the country’s borders into official camps.
“Since the clashes with the Macedonian police, they [Greek authorities] have started controlling everything I bring in my truck — from the level of gas to everything else,” said Stefano Vallin, who runs a small organization bringing food and clothes into the camp.
“There’s more tension than even a week ago, and it feels like the strategy for a military camp,” he said.
Not put off
But while some are resigned to waiting, others are taking matters into their own hands.
Lubani sees little to be gained from moving to a state-run camp, but has not yet tried to cross the border.
However, with widespread reports of smugglers operating within Idomeni, more and more people he knows are attempting the journey.
(source: VOA)