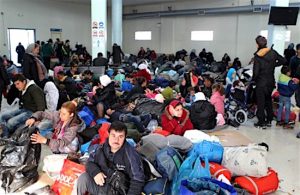 The Greek government is deeply concerned that the Brussels attacks will harden European feelings and attitudes towards refugees and migrants, leading to more border controls and eventually trapping permanently in Greece thousands of migrants presently stranded in the country, according to several reports from Athens.
There are already nearly 50,00 refugees in Greece and the number is rising daily in spite of the recent agreement between EU and Turkey to halt the influx of migrants to Europe.
Moreover, with the Balkan route closed, migrants are left stranded in a country they don’t want to be in while financially strapped Greece can ill afford to accommodate so many people.
If the number of refugees arriving in Greece continue at the pace they have been in the last few months, the government cost could be as high as 4 billion euros, according to some estimates.
The Brussels attacks will add pressure to the voices that at least implicitly call for an end to the Schengen Agreement, as well as to those who call for the isolation of Greece.
Needless to say, the Greek government is unable to control developments in Europe, hence the fears in Athens for the worst.
In the meantime, Greek Prime Minister Alexis Tsipras is expected in the days ahead to speak by phone with German Chancellor Angela Merkel and other European leaders.
Tomorrow there will be a cabinet meeting and one of the issues on the agenda is the possible upgrading of the Ministry of Immigration Policy.
Should this happen, Yannis Mouzalas may be upgraded from Deputy Minister of Immigration Policy to Minister.