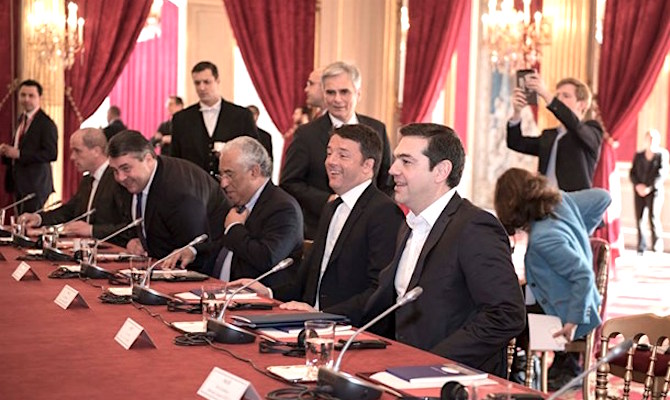 The days when Alexis Tsipras pretended to be a radical communist are long over. As Prime Minister of Greece, Tsipras has gotten rid of the fiery rhetoric of the past, which was immersed in radical, anti-capitalist discourse, and has aligned himself with the forces of European social democracy.
Thus, speaking from Paris while attending a task force meeting of European socialists chaired by French President François Hollande, the ex-radical Greek leader appealed to the values of social democracy as a means of ending the crisis facing Greece, but also of Europe in general.
The current refugee and economic crises facing Europe reveals in the most dramatic way the dividing line between progress and reaction, said Greek Prime Minister Alexis Tsipras.
Accordingly, Tsipras underscored the urgency of progressive forces to stand up for Europe’s humanistic values and do away with economic policies that prepare the ground for the hegemonic rise of the extreme right.
He also noted that the driving forces of euroskepticism are not those voices calling for the end to austerity and in support of social cohesion but rather those in support of neoliberalism.
The Greek Prime Minister said that it is important for all progressive governments in Europe to work together towards charting a strategic course for tackling the problems facing the continent, and that Greece itself would be a main beneficiary of such an approach.
(With information from ANA-MPA)