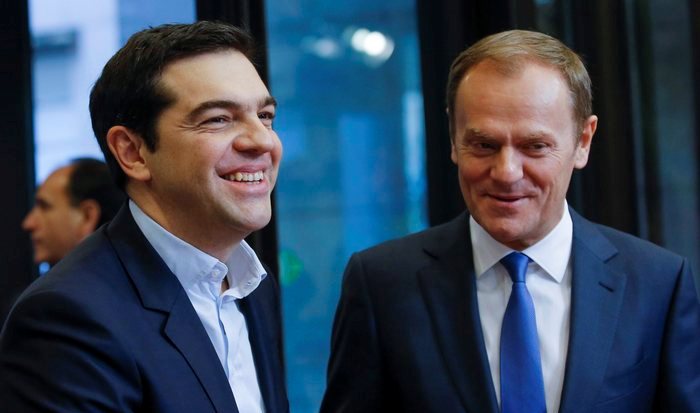 The Greek government reacted to the comment by European Council President Donald Tusk that the closing of the Balkan route for refugees was a joint decision of the European Union 28.
The European official posted another comment on twitter where he thanked the Western Balkan countries for their cooperation in the refugee crisis.
On the first post Tusk wrote that “irregular flows along the Balkan corridor are terminated. It is not a unilateral action but a joint decision of the EU 28.” On the second tweet Tusk thanked Slovenia, Croatia and Slovenia for implementing part of a comprehensive EU strategy to address the migration crisis.
“Do not encourage those who disregard joint decisions,” was the immediate answer of Greek Prime Minister Alexis Tsipras on twitter. At the Maximos Mansion there is anger that the Balkan route was sealed before the March 17 summit.
German chancellor criticizes the closing of the Western Balkan route
German Chancellor Angela Merkel criticized the shutdown of the borders along the Western Balkan route yesterday, in a campaign speech in the Rhineland-Palatinate state where she expressed a different opinion than that of the European Council president.
In comments reproduced by the e-edition of Der Tagesspiegel newspaper, Merkel commented that the measures the Balkan countries take will not be viable without a wider plan to tackle the migrant crisis.
Closing the borders “is not a solution to the overall issue,” Merkel said, adding that fewer migrants may be requesting asylum in Germany but this means the proliferation of refugees trapped in Greece.
“The 27 countries cannot rest on their laurels and let a country deal with the problem by itself,” she said, referring to the EU block and Greece.
In statements published on Germany’s MDR radio webpage, Merkel stated that a solution should be helpful to all 28 EU member-states, while the redistribution of refugees among EU countries is not a decision of the Turkish government, but must involve the United Nations High Commission for Refugees.