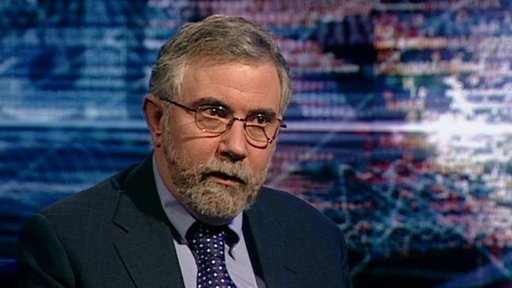 Nobel Prize Winner and Op-Ed Columnist for The New York Times, Paul Krugman, said in an extended interview he granted yesterday to Business Insider that he does not feel optimistic about Europe and sees no progress on the Greek debt crisis.
“The European economy as a whole has been very weak with catastrophic effects on Southern Europe. I would argue that the ramifications run very deep. It’s not just that there’s a huge cost in terms of lost output and lost jobs. Years of terrible economic performance have also done enormous damage to the European project and have basically left Europeans no longer believing in the whole message. The cost has been enormous,” said Krugman.
Asked specifically if “all suggestions about reform were wrong,” Krugman underlined that “Greece is pretty much in a class of its own. It’s the only Eurozone member where it really does look like a solvency problem. And even in that case there should have been significant debt release right from the beginning.”
He went on to say that “Austerity policies have taken what was fundamentally a story about excessive private capital flows and housing bubbles and turned it into lectures of fiscal responsibility that have ended up doing a lot of damage.”
Krugman repeated what he has been saying all along when asked the question of what would have been a sustainable alternative for Greece.
“There should have been a large reduction in the face value of the debt early on. There should have been a large private sector haircut. Plus backstocking a guarantee of liquidity so there wouldn’t be runs on the debt. Greece was going to have to do a fair amount of austerity but not this much. In the end it would still have been ugly, but not on this level.”
With regard to whether Greece should have left the euro, Krugman said the following:
“You could argue that a Euro exit would have been a better thing. If Greece had been able to leave the Euro with the best wishes and the good will of Europe in 2010, it would have been traumatic but less traumatic than what has happened. But I don’t think that was ever really on the table.”
“What could have mitigated the damage? The thing is that what has actually happened has not worked. Greece is still in the Euro. There’s a little bit of economic growth but at the cost of an incredible slump. The ratio of debt to GDP is higher than ever.”
The Nobel prize-winning economist put the final touch on what has gone wrong with Greece’s bailouts by saying that “All of this austerity has not only not resolved the fiscal problem, it hasn’t even moved it in the right direction.”