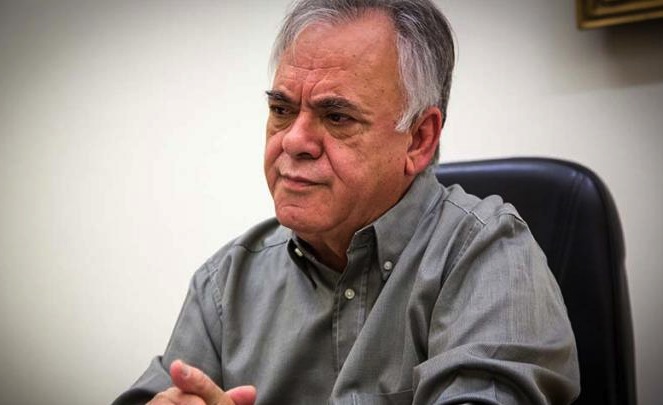 Government Vice-President Yiannis Dragasakis outlined plans for a series of targeted policies to bring about economic recovery in 2016, in an interview published by the newspaper “Avgi” on Sunday. He noted that SYRIZA must now form “social alliances” for the post-memorandum era in Greece.
He also repeated the government’s position that the issue of the debt was primarily a European problem demanding a European solution on the basis of mutuality. A single currency, he noted, could not have different interest rates and lending regimes.
“If the leaders of Europe do not want to proceed with a radical solution now, we will inevitably go to a transitional solution, which will ensure that the debt and the cost of servicing it will not act – as is the case today – as an obstacle to long-term borrowing, investments and social policy,” he said.
According to Dragasakis, Greece’s banking system is expected to assume a more active role in financing investments after a successful recapitalization and completion of the first review of the Greek program, which is expected to restore more normal access to liquidity from the European Central Bank (ECB). He also pointed to 6.5 billion euros that have already been earmarked for public investments in 2016, which might rise as high as 8.5 billion euros.
He further pointed to a new development law due to be passed within the next month, as well as measures to secure financing for small and medium-sized enterprises and new financing instruments that will make use of funds from the EU and other organizations.
Dragasakis said the government was preparing a comprehensive plan to attract foreign investments, especially the long-term investments that fit with its plan for a reorganization of production in Greece.
Dragasakis referred to the need for SYRIZA to now form “social alliances” in post-memorandum Greece, noting that there were middle-class sections of society created during conditions of economic prosperity and could not now be maintained on the same terms. “The government will support these strata to create new terms of survival and prosperity,” he said.
“We need to move away from an anti-memorandum alliance to a social alliance, aiming at post-memorandum Greece. From alliances on the basis of a mechanistic collection of grievances, we must create alliances based on the prospects that we want to give society and the country,” he added.
(source: ana-mpa)