Year in Review: 10 Significant Moments for Greece in 2015 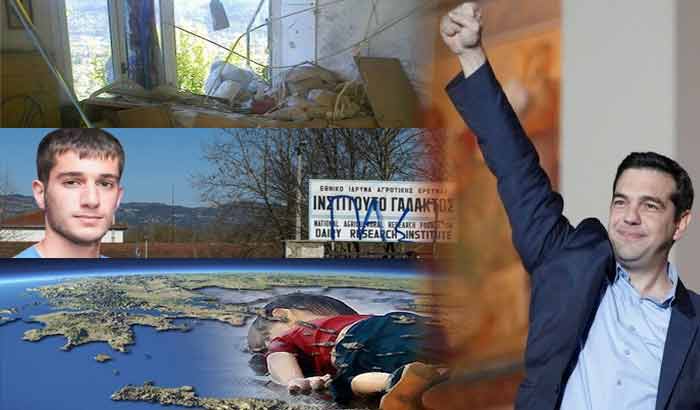 There is no doubt that 2015 was an eventful year for Greece. The economic crisis continued to plague the country, while the election of the new government shook the political scene. The negotiations between Greece and its European partners took a turn for the worse before finally coming to an end and the constant flow of refugees has tested the country’s ability to address the new crisis. Greek Reporter has assembled a list of the 10 most significant moments of 2015.
10. Greece decides not to pursue the Parthenon Marbles return
It was announced on December 9, 2015 that Greece would not further pursue the return of the Parthenon Marbles. In fact the Greek Culture Minister Aristides Baltas stated to the parliamentary committee on educational issues, that “we will not proceed with legal claims because we are at risk of losing the case.” The committee is currently working on a draft bill for the return of cultural artifacts that have been illegally removed from Greek soil.
9. Golden Dawn Trial
The highly publicized Golden Dawn trial began on Monday, April 20. Several Greeks linked to the neo-Nazi Golden Dawn party went on trial with charges of participating in a criminal organization. Among the 69 defendants were the vast majority of the party’s MPs, party members and police officers. It was estimated that the trial would last roughly one year.
8. Greek draft law allows civil partnership between same sex couples
A new draft bill that was introduced by the Greek Ministry of Justice in November allows for same sex couples to sign a civil partnership in order to cohabit and enjoy full rights as married couples. However, the bill does not provide for the same sex couples’ right to adopt children, an issue that will be discussed in the future.
7. A 6.1 Richter earthquake causes Greek island to move
A strong earthquake measuring 6.1 points on the Richter scale shook the island of Lefkada, Greece, on November 17, leaving two woman dead and several buildings damaged. The earthquake also led to the displacement of the island by 36 cm, causing Egremni Beach, one of the most beautiful beaches in Greece, to be swallowed by the earth.
6. First Greek female Prime Minister
On August 20, Greece’s newly elected SYRIZA-ANEL coalition government led by Prime Minister Alexis Tsipras resigned. As a result, an interim government was formed to lead the country to the snap elections that took place on month later on September 20. The Prime Minister of the new cabinet was Greek judge Vassiliki Thanou, the first ever female prime minister of Greece. Thanou was sworn in office on August 27. Before her appointment Thanou served as Greece’s Supreme Court President and also as President of the Electoral Court.
5. Greek student Vangelis Giakoumakis disappears
Greek student Vangelis Giakoumakis went missing on February 6, 2015. The 20-year-old student had been studying at the Dairy School in the city of Ioannina, Greece. Authorities in the country conducted a nation-wide investigation in order to locate the young man, while people all over Greece where making efforts to find out what happened to him. Unfortunately, Giakoumakis was found dead on the morning of March 15, in a swampy area 800 meters from the Dairy School of Ioannina where he attended. It was determined that Vangelis had been targeted and bullied by a group of older students and authorities are still trying to find the people responsible for his death.
4. Greek scientists participate in efforts against cancer
Greek scientists from the University of Patras are making a significant effort to help in the battle against cancer by developing an innovative drug. The research team has been working at the Pharmaceutical Chemistry Laboratory of the Department of Pharmacy at the University of Patras, led by associate professor Plato Magriotis. According to the university, the researchers aim to create a new potent anti-cancer drug that will specialize in the treatment of sarcoma, melanoma, ovarian cancer, breast, kidney, prostate and non-microcell lung cancer.
3. First Greek leftist government
Leftist SYRIZA party managed a historic victory in the pivotal elections of January 25, amidst the economic crisis that has plagued Greece for years. SYRIZA supporters were jubilant and have taken it to the streets to celebrate. Alexis Tsipras gave a speech promising a new day for Greece; a day of hope and changes for the better. A few days later, Tsipras’ new cabinet, in the coalition government with the Independent Greeks, was sworn in office with Yanis Varoufakis in the crucial position of Finance Minister.
2. Greek referendum
Greek Prime Minister Alexis Tsipras announced that Greece will hold a referendum to ask the Greek people if they approve of a bailout deal with the country’s creditors, shortly after midnight on June 27. It was established that the referendum would take place on July 5. The government’s decision led to the imposition of capital controls, while the country’s banks remained closed for two weeks. In the end, Greeks voted against the bailout deal, with the “No” votes reaching an astounding 61%.
1.Refugee crisis
Refugees and migrants have been arriving in Greece for years from Syria and other middle eastern countries, fleeing the conflict in their countries and seeking a better future in northern Europe. However, over the summer of 2015 the number of refugees arriving on Greek islands through Turkey increased significantly, paralyzing the country. Smugglers helped the refugees cross the dangerous sea, receiving large amounts of money for their illegal services. The dangerous journey from the Turkish coast has led to the death of hundreds of refugees, including numerous children. Furthermore, Greece is facing serious problems due to the large influx of migrants, since there is no way to accommodate them all. The refugee crisis has received mass media attention over the last months, while people are questioning Europe’s ability to accommodate and register all the undocumented refugees.

Americans have been a major part of summer tourism in Greece. Although they may not make up the largest contingent of visitors, they spend more.
Greek News