Greek Prime Minister is Confident in His Government's Future 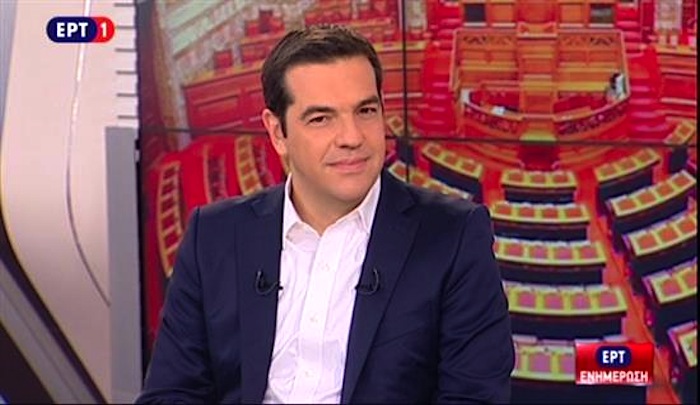 Greek Prime Minister Alexis Tsipras sought to defend the Greek government’s viability and performance in an interview with the Hellenic Broadcasting Corporation (ERT) on Monday evening.
It has been less than three months since the second SYRIZA-ANEL coalition government was elected to power, yet its grip has already weakened. The government’s parliamentary majority has slid down from 155 seats to 153, just two seats away from the required minimum.
Amid discussion of future losses to the party, Tsipras denied that there could be elections soon. An important difference that he believes distinguishes this administration from other bailout governments is that these last elections happened right after the difficult bailout agreement. As a result lawmakers who oppose the program will be viewed as suspect.
“I feel very safe with the governmental majority of 153 seats,” he said.
The Prime Minister justified his effort to reach out to Greece’s political leaders as an attempt to foster a dialogue and create an understanding on issues that affect everyone across the board and will have long-term implications, such as the refugee crisis and reforms in the country’s social security system. He reiterated however that he is not asking for political support for his administration’s plight.
One option that could move the government away from risk of an untimely downfall is choosing to form a national unity government. Tsipras however, rejected such a possibility during the interview, noting that the differences among the various parties are too big while remaining adamant that there is no such need for a national unity government.
“SYRIZA and ANEL are the only foundation of stability in a continuously unstable environment,” he said.
Bailout
The three year 86 billion euro bailout program that Tsipras agreed to in August is close to concluding its first phase. The final one billion euro sub-tranche that should be disbursed to Greece in mid-December once a set of 13 bailout prior actions is legislated in parliament, will mark the completion of the first 26 billion euro (or less) installment. This will pave the road for the first review of the bailout, a precursor to the program’s next phase.
This next phase is set to start off with a set of controversial reforms in the labor, social security and agricultural sectors. Tsipras said that negotiations over the exact reforms will take place following the first review.
The prime minister also committed to not further cutting down primary pensions, the anticipated reduction of which is already a heated topic in Greek society.
Another long-term issue is whether the International Monetary Fund will officially take part in the program. After participating in the first two bailouts, the IMF has expressed reservations over this third bailout package, arguing that there needs to be debt relief for Greece as well as a demonstrated implementation of the bailout by the Greek government if the IMF is to provide assistance.
Tsipras noted that his government has not requested for the IMF to participate, as he believes Europeans should be able to deal with their own problems. Furthermore, the IMF’s representatives are asking for harsh measures and reforms that cannot be implemented and debt relief proposals that they know Europeans will not accept. If the IMF wants to participate he contended that they will have to compromise.
The Greek Prime Minister also addressed the fund that is expected to monetize 50 billion euros of Greek assets, as agreed on in the bailout. He dispelled the notion that the government has remained inactive on this front, claiming that Greek Finance Minister Euclid Tsakalotos submitted proposals to Greece’s creditors on November 11.
Tsipras further noted that there will be developments on privatizations by the end of the year.
Refugee Crisis
While the financial crisis has been at the epicenter of Europe’s problems over the past few years, the ongoing refugee crisis has come to the forefront in the past few months
750,000 of the more than 900,000 refugees and migrants that have arrived in Europe have entered through Greece. Revelations that some of the Paris attackers passed through Greece, raised questions about Europe’s border control and Greece’s role in the crisis.
Tsipras defended his government and the Hellenic Coast Guard noting they are doing all they can and argued that everybody who steps on a Greek island is registered and identified.
He further claimed that the government has made certain requests to Frontex, who has not delivered accordingly. Specifically, out of the 36 ships that were requested for patrol assistance only eight have been deployed, while just half of the manpower requested has arrived in Greece so far. He clarified however that the government has no problems with Frontex.