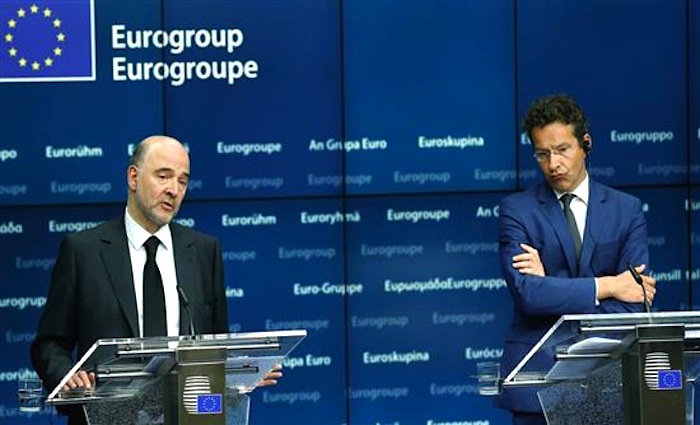 Eurozone officials addressed the progress of the Greek bailout and its future, following a Eurogroup meeting in Brussels on Monday.
Eurogroup President Jeroen Dijsslebloem noted that the design of the second stage of the bailout package had been agreed on in November by the Euro Working Group.
“We called on the Greek authorities to implement these milestones as soon as possible and as agreed, the objective is to settle all this by mid-December so we can focus on some of the major fiscal and structural reforms that are still open and need to be finalized for the first review early next year,” he said.
Earlier on Monday, Greek Prime Minister Alexis Tsipras and his ministerial cabinet agreed to adopt the second list of bailout prior actions by December 18.
European Commissioner for Economic and Monetary Affairs; Pierre Mosvocici noted that a team from the Commission will head to Athens to discuss how the recently adopted 2016 budget targets can be achieved. Moscovici addressed the budget’s improved estimations, which expect a smaller recession in 2016 than what was projected in August.
The disbursement of the one billion euros will mark the end of the first agreement for 26 billion euros of bailout funds. European Stability Mechanism Chief Klaus Regling pointed out that thus far 17.7 billion euros have been disbursed for fiscal needs, bank recapitalization and debt repayment. As a result not all of the 26 billion euros need to be disbursed.
Regling noted that while reforms have been adopted and funds have been disbursed, the delay in some of the reforms’ implementations has caused a delay in disbursement.
The Greek government and creditors will negotiated on the next step for the bailout in January, Moscovici noted.
“There are some difficult decisions to be taken on pension and on budget strategy. However this year, after some difficult moments in the beginning, Greece has shown itself able to take difficult necessary decisions when they were in the interest of the country and these measures I am talking about are in the interest of the country. And the Commission will do everything we can to help progress toward an agreement,” he said.
Bank Recapitalization
A European Central Bank stress test had found in early November that Greece’s four major banks required 14.4 billion euros to cover their capital needs. This was already below the 25 billion euros of bailout funds, that had been reserved solely for Greek banks and as two of Greece’s banks were able to raise the capitals without the ESM’s assistance, the eventual funds should be much lower than initially expected.
The Eurogroup President called the recapitalization an “overall good success” that will cost the program 5.5 billion euros. The last disbursement should be made on Friday following a meeting of the European Stability Mechanism’s board.
Regling noted that 2.7 billion euros in ESM bonds were provided to recapitalize Piraeus Bank, while there is also a 2.7 billion euro pending request from the National Bank of Greece (NBG) that will be deliberated on during ESM’s Friday meeting.