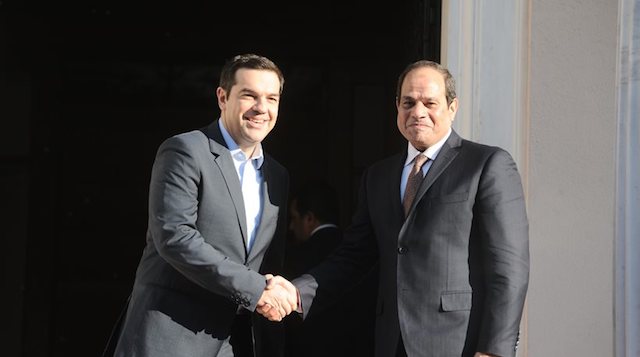 The Greek and Egyptian heads of state are looking to bring the two Mediterranean countries closer through an economic and political partnership.
Greek Prime Minister Alexis Tsipras met with Egyptian President Abdel Fattah el-Sisi, who is on a two day state visits to Greece, at the Maximos Mansion on Tuesday afternoon.
In a joint press conference following their meeting, the two leaders reaffirmed the two countries’ strong ties and expressed their optimism for further development of their relations.
“There are incredible prospects being shaped for an economic partnership in energy, in the naval lines, in the aerial and naval transports, in the construction sector and infrastructure,” he said.
Tsipras proclaimed that the two countries will sign two deals for a partnership between the two Northern Greek ports of Kavala and Alexandroupoli and the two Egyptian ports of Alexandria and Damietta.
The Greek Prime Minister also added that the two countries are stabilization factors in a destabilized region and their partnership could further contribute to its stabilization. On his part, Sisi noted that Egypt is committed to cooperating with Greece for the purpose of restabilizing the region.
Tsipras pointed out that the two countries will also work together via intelligence sharing and coordination to deter the threat of “religious fundamentalism,” Sisi pointed out that it will not be enough for Greece, Cyprus and Egypt alone to work together on this anti-terrorism front and the international community will have to work on it as well.
Sisi said that he believes Greeks will get through the ongoing crisis and praised the relationship of the two countries, which he believes to be an example others should follow.
Sisi and Tsipras will meet with Cypriot President Nicos Anastasiades on Wednesday for a trilateral conversation.
Sisi Meets Prokopis Pavlopoulos
President of Republic Prokopis Pavlopoulos received on Tuesday visiting President Sisi at the presidential mansion.
Pavlopoulos referred to the exceptional cooperation of Greece, Cyprus and Egypt adding that the trilateral meeting will focus on a series of matters and particularly on the delimitation of the EEZ.
The Greek president underlined that the trilateral cooperation constitutes a model because it fully respects international law and the written and customary law and noted that Turkey can learn a lot regarding its cooperation with Greece and Cyprus.
(With information from ANA-MPA)