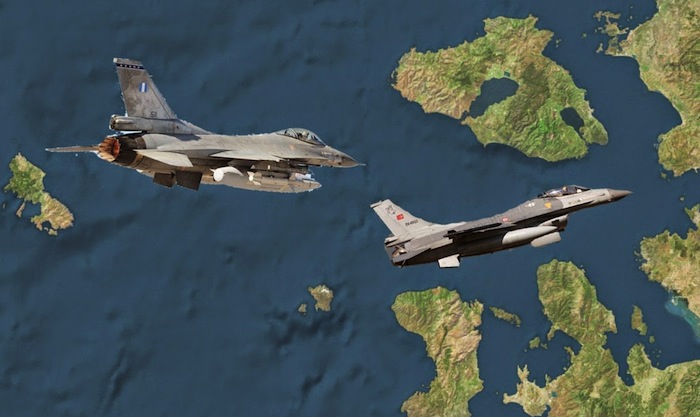 Following the controversial takedown of a Russian Air Force aircraft by Turkish F-16 authorities, Wikileaks has released figures on Turkish violations of Greek airspace.
A Wikileaks tweet, citing data compiled by the University of Thessaly, based on Greek military records, alleges that Turkey violated Greek airspace 2,444 times in 2014 alone, while there are 636 such violations in 2013.

A United States classified cable, also released by Wikileaks on Tuesday, reports that in June 2005, the then Greek Foreign Minister Petros Molyviatis told the American Ambassador that Turkish aircrafts did not have to fly 40 times per day over disputed airspace to get their political point across and could instead limit it down to one flight per week.
Greek Foreign Affairs Minister Nikos Kotzias held a phone conversation with Russian Foreign Affairs Minister Lavrov on Tuesday evening, that included discussions on Tuesday’s incident as well as the war in Syria, Greek media reports. Kotzias also spoke with Turkish Foreign Affairs Minister Melvut Cavusolglu and German Foreign Affairs Minister Frank-Walter Steinmeier.
Real.gr reports that a Russian foreign ministry announcement notes that Russia understands Turkey’s provocative behavior considering multiple violations of Greek airspace over the years.
The Turkish Permanent Mission to the United Nations informed United Nations Secretary General Ban Ki-Moon on Tuesday, that the Russian aircraft had violated Turkish airspace for 17 seconds before being shot down. During a press conference on Wednesday morning, Lavrov argued that Turkey’s decision looked pre-planned, noting however that Russia will not declare war against Turkey over the incident.
The pilot of the Russian SU-24 plane that was brought down, claimed on Wednesday that Turkey did not warn the plane at any point and denied that the aircraft violated Turkish airspace even for a second. According to the New York Times, during Tuesday’s NATO meeting,Turkish representatives played a recording with the warnings their air force issued to the approaching Russian aircrafts, with no response being heard from the Russian planes.
Reuters cited an anonymous United States official on Wednesday who claims that the United States believe that the plane was shot down within Syrian airspace.

The Myth of Europa and How Europe Got its Name