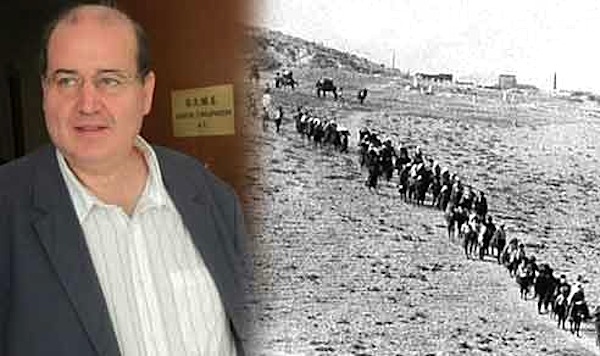 Greece’s Education Minister Nikos Filis rejected the notion that the slaughter of Pontian Greeks by the Turks was a genocide.
The leftist minister appeared on Star television late on Monday night in an interview and debate with the audience. Specifically, Filis said that he recognizes the pain and suffering of Pontians and is saddened by the blood shed, but a line should be drawn between a “bloody ethnic cleansing and the phenomenon of genocide.”
After comments to the contrary by the show host and an audience member, Filis maintained his position saying that he had expressed the same exact opinion seven years ago as a journalist and reiterated that the killings “was not a genocide in the scientific sense.”
Filis clarifies that this was his personal opinion and does not express the opinion of the Greek government.
The minister’s comment created a controversy among Pontians and other Greeks, causing several lawmakers of the opposition to call for his dismissal or resignation.

Records show that in the aftermath of World War I, at least 350,000 Pontian Greeks were exterminated through systematic slaughter by Turkish troops, deportations involving death marches, starvation in labor and concentration camps, rapes and individual killings. Entire villages and cities were devastated, while thousands were forced to flee to neighboring countries.
The Ottoman government’s plan to annihilate the Christian populations living within Turkey, including Greeks, Syrians and Armenians, during World War I was set into force in 1914 with the decree that all Pontian men aged between 18 to 50 would have to report to the military. Those who refused to do so, were ordered to be shot immediately.
The Pontic genocide had officially been recognized by Greek Parliament in 1994. Also, an anti-racist law voted in September 2014 has sanctioned prison sentences for those who deny genocide as well as fines from 5,000 to 20,000 euros, and even stricter fines for public officials (10,000-25,000 euros).