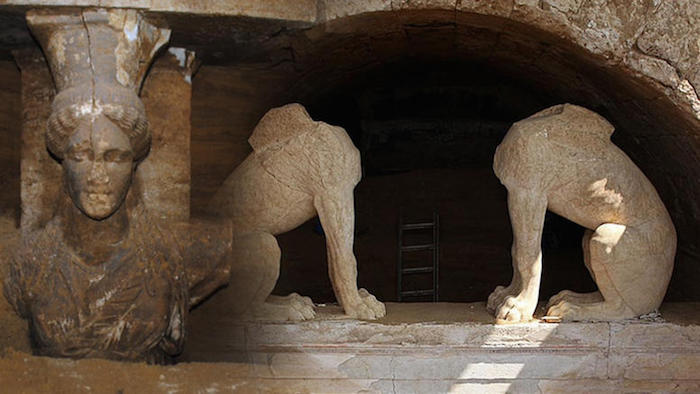 Greek archaeologist, excavator and professor of classical archaeology Panagiotis Faklaris told Greek radio on Thursday that there is no indication that the Amphipolis tomb has any connection to Hephaestion or that Alexander the Great had ordered its construction.
“There is no historic or scientific basis that Hephaestion had a connection with Amphipolis,” Faklaris said dispelling Katerina Peristeri’s previous claims.
Peristeri, the archaeologist who is in charge of the tomb’s excavation, revealed during a conference in Thessaloniki, Greece, that the opulent underground monument in northern Greece, may be a funerary monument for the closest friend and general of ancient warrior-king Alexander the Great, Hephaestion.
“This is a monument which has tombs inside, and Hephaestion was not buried in Macedonia,” Faklaris mentioned during the interview while he continued commenting on the monogram that is said to have been found inside the tomb saying that “there is no evidence that Alexander the Great ordered this monument’s construction.”
Faklaris, also, questioned the claims of architect Michael Lefantzis on the Lion of Amphipolis, stressing out that the monument should not in any way be related with the Kasta Hill, taking into account that “it was found around 2 kilometers away.”