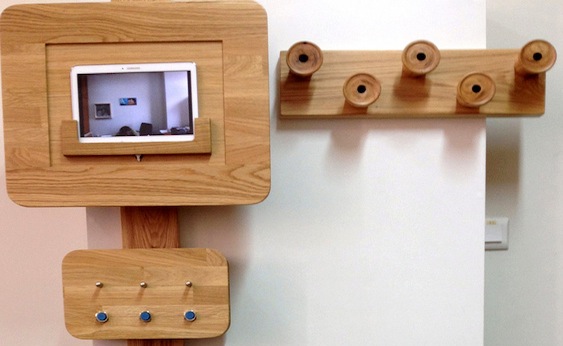 “Heart” is the name of the first ecological and smart furniture. Heart does almost everything; the mirror turns into a tablet but only for specific users in the house.
It recognizes the user from his face and reacts to a message as “hello.” Its embedded motion sensors in several parts of the furniture reminds the user where objects such as keys, hats, umbrellas and wallets are. The system has also been programmed to make suggestions on several occasions. For instance, if the weather is cold and if the user has forgotten his keys. The smart furniture combines ecological materials according to the European standards with smart operation and is the final product of the research work “GSF” (Green Smart Furniture).
The innovation was completed recently by a special team of researchers headed by Dr. Ioannis Papadopoulos, professor of the department of design and wood technology of the Technological Institute of Thessaly, within the framework of “Archimedes III” programme. Professor Papadopoulos said to ANA-MPA that the system that composes the character of the ‘smart furniture’ is: an Android tablet, a PLC and contains motion sensors.
The creation of advanced furniture with an ecological approach upgrades the standard of living and is a huge support for the elderly. The results of the research has already been presented at international conferences in New York, London, and in Italy, Portugal and Norway as well as in two science magazines.
(Source: ANA-MPA)