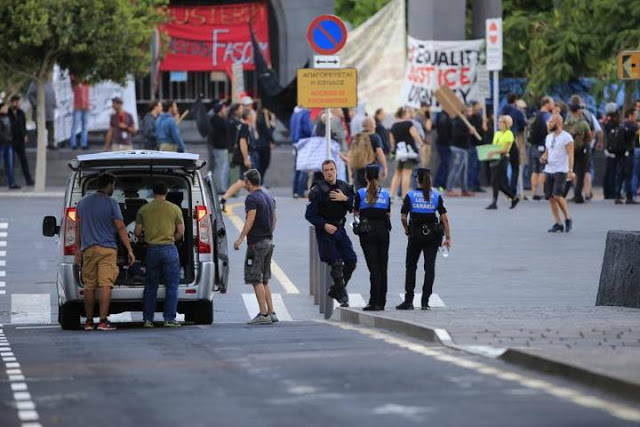 The new Jason Bourne film starring Matt Damon starts on the streets of Athens, during the height of the financial crisis in Greece and Europe. When the movie is released in July 2016, viewers will see super-spy Bourne run through protester-filled Syntagma Square in Athens’ center, but Greek audience members may feel that something is off…as all of those scenes were actually shot in Tenerife.

Santa Cruz, Tenerife will fill in for Athens as Bourne’s producers favored the tax structure of the Canary Islands over the bureaucracy involved in setting up productions in Greece.

Why else was Tenerife chosen? As Santa Cruz’s Mayor Jose Manuel Bermudez explains, producers favored the city’s ability “to organise large, mass events like the Carnival. They know [Santa Cruz is] accustomed to managing large safety devices, traffic and that experience has tipped the scales”.

The streets of the Canary Islands were transformed by set designers who put Greek flags on display, sprayed Greek graffiti on surrounding walls, and hired extras to re-enact the protests that had overrun central Athens at that time. Many of the extras are unemployed local residents, who the mayor asked the filmmakers to prioritize for hiring purposes.

Although it might seem ridiculous to transform a foreign city into modern-day Athens when modern-day Athens is all set up and waiting just a couple of countries away, none of this should be surprising to those that have been following Greece’s relationship with Hollywood.

This isn’t the first time Hollywood has chosen other countries to fill in for Greece in movies that supposedly take place there. Most of the recent “Hercules” movie was shot in Budapest, “Immortals” was filmed in Montreal, and “300: Rise of an Empire” was shot in Bulgaria.

For many of these films, Greece was one of the top countries considered in filming location decisions. So why were other countries picked? Evan Spiliotopoulos, the screenwriter for Hercules, explained the problem to us in the clip below.

“Budapest lobbied for the film. Budapest offered tax breaks, offered studios….What Greece is lacking is a desire and a motivation to bring Hollywood studios over. They didn’t make it easy for us. They didn’t open the doors. They didn’t offer anything. So Greece was considered. Greece was rejected.”

What the problem boils down to is that Hollywood would actually like to film in Greece, especially for movies that are set there, but Greece is making it extremely difficult for Hollywood productions to get their foot in the door. Although Greece can offer great talent and film crews, the enormous Greek bureaucracy, the inability of all the previous governments to hire knowledgeable industry-people to lobby for Greece and guide the productions, and the lack of tax breaks, has given the country a really bad filming name in Hollywood.

Some might object that Greece is dealing with a lot of issues of its own at the moment, between its deepening financial crisis and frequent elections, so this shouldn’t be a priority. However, opening up the doors to Hollywood and collaborating with producers would not take that much effort or distract policymakers from Greece’s core issues, and the result could be a big financial and image boost for Greece as a whole.

The spotlight has been on Greece for months now, and people from all over the world have heard more about our country in the last year than they have been subject to in their entire lives. If there was a time to take advantage of the world’s attention on us to promote different sides of Greece through Hollywood, and make money doing so, that time is now.

In an era when Romania and Bulgaria, with their current economy and infrastructure, can become preferred filming locations for Hollywood, there is no reason why Greece shouldn’t take advantage of these same filming opportunities.

After all, Greece actually has some power and sway to make Hollywood connections and bring in film shoots, for very simple reasons.

Firstly, Greeks have made their way into the top ranks of Hollywood, whether as award-winning directors (Alexander Payne), studio heads (Jim Gianopulos), screenwriters (Evan Spiliotopoulos), or CEOs (Ted Sarandos). Many of these Greeks and Greek-Americans working behind the scenes in the film industry feel proud of their roots and are involved in the Greek community both at home and abroad; they could be important connections for a Greek government looking to reach out to Hollywood. In addition, Hollywood’s fixation on mythology and the ancient world has been stronger than ever in the past few years. All these factors, coupled with Greece’s natural beauty, diverse landscape, and excellent film crews, make Greece an ideal destination for Hollywood films.

The path to making Greece a prime blockbuster shooting location is paved and ready. Now Greece just has to open the door, and claim its spot as a Hollywood filming hotspot to boost the country’s economy, profile, and reputation.