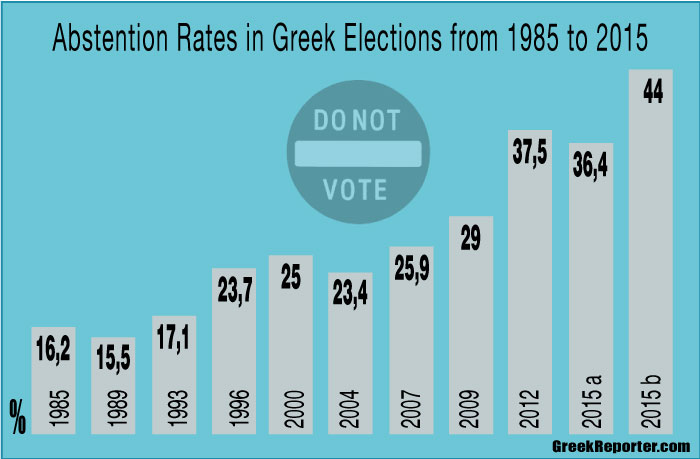 SYRIZA and its leader Alexis Tsipras may have been Sunday’s big election winners, but one of the facts that stands out about this election is the unprecedented abstention rate.
With 90% of the votes counted, 43.55% of Greeks who were eligible to vote did not go to the polls on Sunday. In real numbers this means that out of 9,836,997 Greeks who could cast their ballot approximately only 5,562,820 people voted. This is the highest abstention rate in the history of Greek parliamentary elections following the fall of the dictatorship in 1974.
Abstention rates in Greek elections have been increasing in the past eight years. In 2009 29% of Greece’s eligible voters did not vote as opposed to 25.9% in 2007. The second highest abstention rate was recorded in June 2012 when 37.5% of Greeks did not go to the polls.
Voting in Greece is mandatory by law, however, it is rarely enforced. This year’s low turnout rate potentially reflects that Greeks did not believe that their vote would make a difference, since any government would have to enact the policies of the new Greek bailout agreement that was singed in late August. In addition, this is the third time Greeks have been called to the polls this year. The first time was in the January elections, that were followed by a second vote for the July 5 referendum.
In many instances Greek voters must travel to the district where they are registered to vote and that could involve expensive trips far from where they reside. Some Greek analysts also noted that many citizens distrust the country’s political system to the point that they don’t even want to vote.
Whatever the case may be, SYRIZA won their second election in eight months and Tsipras will form a coalition government to represent the Greek people, or at least the 56.5% that voted.