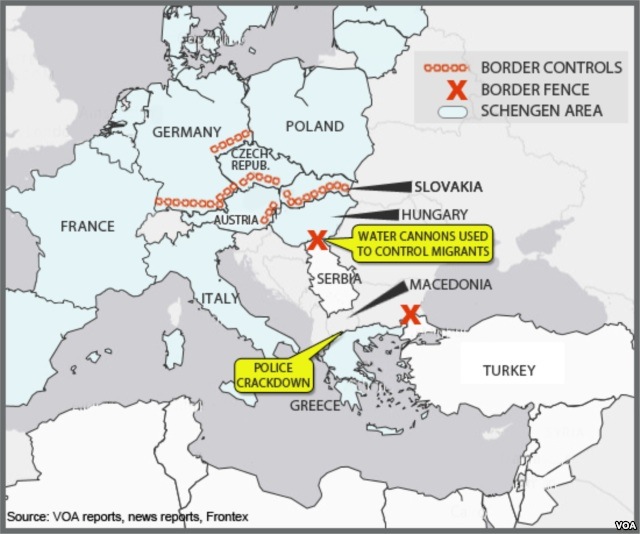 “I was shocked to see how these refugees and migrants were treated,” Ban said. “It is not acceptable.”

The U.N. secretary-general said the migrants “were people fleeing war and persecution” and that “they must be treated with human dignity.”

Police clashed for hours with the migrants after blocking one of the biggest entry points into the European Union.

Hungary said the migrants were trying to push their way past the border fence and presented a danger to the country.

In the first case involving Hungary’s tough new anti-migrant laws, a court Wednesday convicted an Iraqi man of illegally crossing the border fence with Serbia the day before, ordered him expelled and excluded him from Hungary for a year.

As Hungary closed its border crossing, nearly 900 migrants streamed into the EU through the cornfields of Croatia.

“We are ready to accept – and, if you will, direct – those people regardless of their religion and the color of their skin,” Milanovic said. “We are ready to direct them to the destinations they obviously want to reach with a keen desire in their hearts: Germany, Scandinavia, those several countries.”

As the migrants walked into Croatia from Serbia’s western border, authorities urgently dispatched de-mining experts to the border to mark minefields left from the Balkan wars of the 1990s.

Hungary defended its border closing, saying it was protecting its territory against the influx of migrants looking for better economic opportunities, not fleeing persecution in their homelands.

Still more migrants sought entry to the EU elsewhere, walking from Salzburg, Austria, into Germany, or through Lithuania on their way to Scandinavian countries.

Syrian President Bashar al-Assad blamed Europe for its biggest mass of migrants since World War II. He accused European of supporting Syrian “terrorists” – his term for several groups trying to overthrow his regime.
“If you are worried about them [the refugees], stop supporting terrorists,” Assad told Russian media.
(source: VOA)