GRNews
GreekReporter.comGreeceSYRIZA Leader Tsipras from TIF: ‘We Want to Exit the Crisis’

SYRIZA Leader Tsipras from TIF: ‘We Want to Exit the Crisis’ 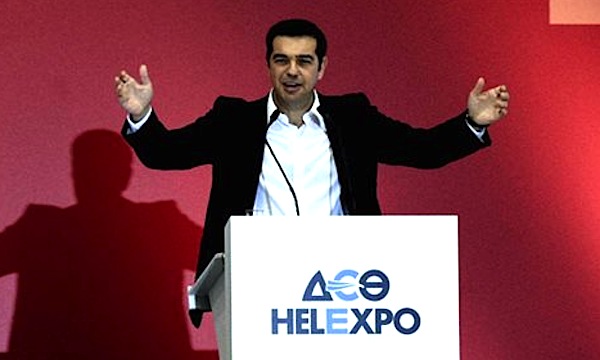 An exit from the crisis that would allow Greek society and its people to remain standing on their feet is SYRIZA’s main aim, party leader Alexis Tsipras said during his speech at the Thessaloniki International Fair (TIF), where he presented the party’s program.
“We want to exit the crisis with society and people still standing on their feet; growth must not be the result of social leveling,” Greece’s former Prime Minister told attendees at Vellidis conference center.
He said the battle to improve the agreement reached between Greece and its partners has not ended and that it matters who will continue this negotiation, noting that regardless of the unpleasant measures, the deal can create a new prospect for the Greek economy.
“The agreement we achieved through a very hard negotiation is a text that is deliberately open to addressing specific issues, which explicitly formulates the possibility of finding equivalents through negotiation with the institutions,” he explained, adding that the economy’s growth will depend on whether the next government will succeed or fail to address those issues.
He attacked the main opposition, saying that “some people were shouting that we have a secret plan to get the country out of the euro and now that they have been proved wrong they don’t talk about themselves. If we had not brought a deal, they would have told us we destroyed the country and now they tell us we are not implementing our pre-election program.”
Tsipras then went on to discuss the issues on which SYRIZA will fight for: “The first and main battle is debt restructuring and the second big issue the next government will have to address is the non-performing loans.”
(source: ana-mpa)