GRNews
GreekReporter.comGreeceTension Among Migrants in Lesvos - Police in Kos Make Plea for... 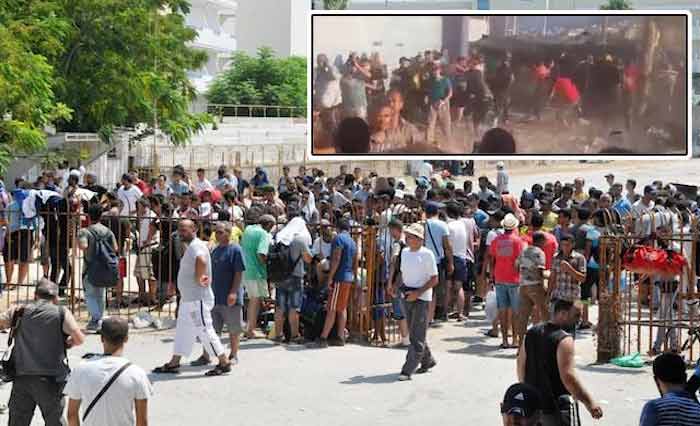 Tension broke among immigrants and refugees on the island of Lesvos, Greece, on Monday evening.
The new arrivals, who were in line outside the police station to get registered, began fighting among themselves after a group got tired of waiting and tried to cut the line.
A video from the incident shows rocks and other objects being thrown outside the police station.
The island of Lesvos, one of the main points of entry for the more than 120,000 refugees and migrants that have come into Europe, has a reported 4,000 immigrants and refugees at the moment.
In the southern Aegean Sea, the island of Kos has also been a major entry point for those crossing the sea from Turkey. Last week, an estimated 7,000 migrants and refugees were on the island. Riots broke out on Tuesday, while the following day migrants were locked inside the island’s stadium.
Amid this reality, the Union of Police Workers of the North Dodecanese Islands has issued a letter directed to the island’s prosecutor regarding the circumstances in Kos.
The letter describes the incidents created by migrants and refugees who try to force their way into the police station to get their documentation faster. The problem is further exacerbated by women and children sitting under the sun, the inability of many migrants and refugees to speak or understand English and by the limited number of police officers on the island.
“Unfortunately, we are one step away from experiencing an incident endangering human lives, serious physical injuries, sexual crimes, crimes against property and crimes of other nature,” the letter reads.
The union also claims that there is a hygienic problem on the island due to the combination of massive numbers of migrant and refugee arrivals, as well as the lack of reception facilities. The letter warns of disease outbreaks that could influence everybody on the island.
The union concludes by asking the prosecutor to intervene so that the police are able to effectively execute their duty.
By midday Monday, 1,166 Syrian refugees had boarded the “Eleftherios Venizelos” passenger ship, which is docked in the port of Kos and is scheduled to host 2,000 to 2,500 migrants and refugees for 15 days.