GRNews
GreekReporter.comGreeceGreece Remembers the Day Democracy was Restored 41 Years Ago

Greece Remembers the Day Democracy was Restored 41 Years Ago 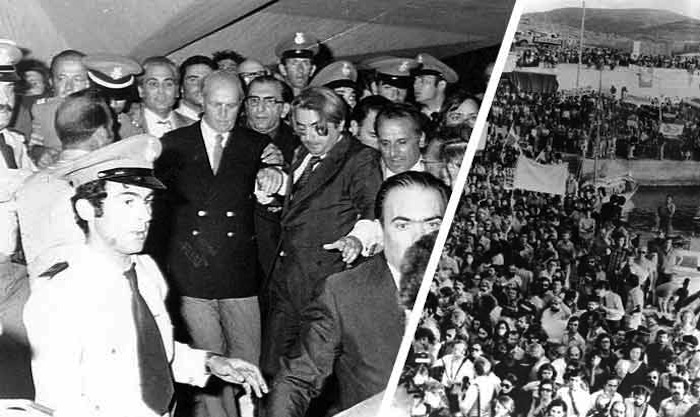 July 24, 1974 is an important day in modern Greek history as it marks the day democracy was restored after seven years of military dictatorship.
A few days earlier, a failed junta-instigated military coup in Cyprus gave Turkey a great excuse to invade the island on July 20 and occupy one third of it. The dictators in Athens, unable to handle the situation, decided to pass the government to the hands of politicians and stepped out. On their part, the politicians decided to call on Constantinos Karamanlis to become prime minister of the Greek republic.
Karamanlis, who had served four times as Greece’s prime minister, was self-exiled in Paris since 1963. At 2:00 am on July 24, 1974, he arrived at the Athens airport with many Greeks welcoming him as a messiah. He was sworn in at 4:00 am by Archbishop of Athens and all of Greece Seraphim and the temporary President of the Hellenic Republic, Phaedon Gizikis.
At noon the same day, a part of the new government was sworn in, comprised mainly of politicians from the Center and the Right. On July 26, the rest of the cabinet was sworn in.
The immediate actions taken for the restoration of democracy were the release of all political prisoners, amnesty for political offenses, the closing of a political prisoner camp in Gyaros and other such camps, the return of nationality to Greeks who were stripped of Greek citizenship by the junta, and all actions required for Greek society to return to normalcy, especially in the Armed Forces and Police.
Other actions were the legalization of the Greek Communist Party and other leftist parties and factions and the adoption of a new constitution. In December 1974, in a referendum in which two thirds of the people voted against kingship in Greece, political history in the country changed forever.