GRNews
GreekReporter.comGreek NewsEconomyWhen Greece Wrote Off German Debt in 1953 and How Germany Wants... 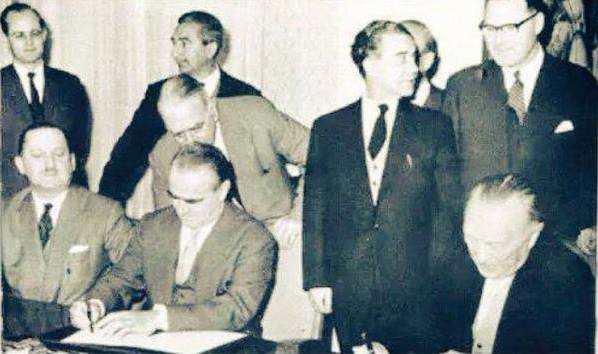 Greece’s finance minister Constantinos Karamanlis signs the agreement for the German debt write off
Germany could show some good behavior and write off a part of greek debt like Greece did for Germany in 1953. Prime Minister Alexis Tsipras’ speech in the European Parliament on Wednesday touched on an issue that Germany has treated as a taboo during the lengthy negotiations between Greece and international creditors.
After Germany’s Manfred Weber, a member of the conservative CSU party, trashed the Greek prime minister accusing him of bringing Greece to the brink of bankruptcy and destroying confidence in Europe, Tsipras replied bringing up the issue Germany is dreading: That of the generous write off of the German debt in 1953.
Six decades ago, the Western allies decided to erase more than half of postwar Germany’s debt. This helped the country recover from the ruins of war and foster a prolonged period of prosperity.
“When we talk about solidarity you should remember 1953, when Germany, after two world wars, was left devastated and indebted. At the time, Europeans agreed to write off the vast majority of its debt and to put a development clause on the remaining debt. That’s solidarity!” Tsipras told Weber.
In 1953, an international conference was held in London during which the allies decided to write off more than 50 percent of West Germany’s debt that was accumulated after two world wars. The United States persuaded European allies, including Greece, to erase part of the debt and relinquish reparations in order to build an economically stable and secure Western Europe. The deal was part of the Marshall Plan, the U.S. program to rebuild European economies after World War II.
At the time, Constantinos Karamanlis was finance minister of Greece and he was the one who signed on its behalf the German debt write off deal. When he became prime minister in 1955, Karamanlis was the politician who started the procedures for Greece entering the European Economic Community, as the European Union was called at the time. Karamanlis managed to finish Greece’s accession to the EEC in 1979, during his fourth term as Greece’s prime minister.
“Tsipras is right to remind Germans how well they were treated, with both debt relief and money from the Marshall Plan,” said in January Professor Stephany Griffith-Jones, an economist at Columbia University.
The similarities between West Germany’s debt at the time and today’s Greek debt are numerous and significant. The International Monetary Fund stated that the Greek debt is not sustainable. Also, the Greek bailout must have growth clauses in order for the economy to come out of the slump. Thirdly, the Greek economy must be supported by international investments, and finally, Greek exports must be heavily supported by European lenders so that they have the incentive to get their money back.
It is time then for Germany, Greece’s biggest lender and Europe’s strongest economy, to show the same generosity poor Greece had shown in 1953 and write off part of its debt. That’s solidarity.