14 Individuals Honored for Their Contribution to Canada-Greece Relations 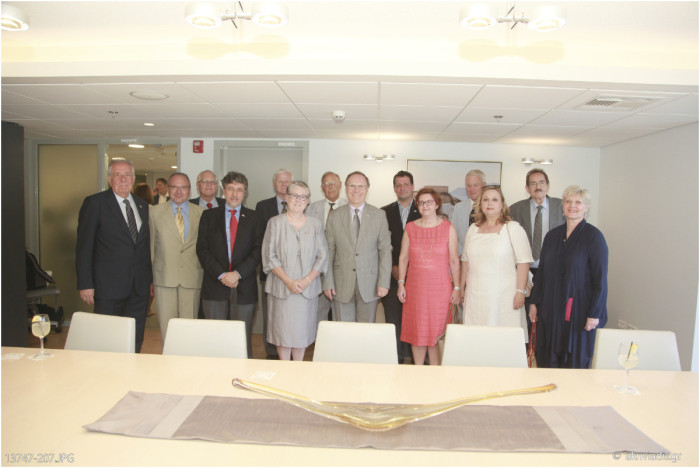 On the occasion of Canada Day on July 1, the Embassy of Canada honored 14 individuals who have made important contributions to Canada-Greece relations. Ambassador Robert Peck awarded “Maple Leaf Citations” and a special West Coast aboriginal (Haida) silver-plated ladle in a handcrafted red cedar box to each honoree drawn from the world of business, academics, education, the arts and the Canadian expatriate community.

The following people were honored from the business world:

George Ghonos
Managing Director, Greece & Balkans, McCain Hellas S.A.
Business pioneer and entrepreneur, George Ghonos, who brought McCain’s Hellas to Greece over 25 years ago and continues to innovate in the spirit of the company’s corporate motto “Be good, do good.”

Vassilis Sakellaris
President, TourGreece (Official Representative for Air Transat)
For his significant contribution to the development of tourism between Canada and Greece, and vision as operator of Tour Greece since 1979, which has the most important share of the Canadian travel market in Greece.

From the Academic and Education world:

Professor Mary Koutsoudaki
For her work as a co-founder of the Canadian Studies Centre at the National and Kapodistrian University of Athens in 2000 and for successfully introducing a Canadian comparative literature course for the first time in a Greek University.

Professor Michael Spourdalakis
For his work as a co-founder of the Canadian Studies Centre at the National and Kapodistrian University of Athens, commitment to the academic profession and ongoing contributions to developing academic ties between Greece and Canada.

Don Matthews; Chris McClinton; Ian Miller
As citizens of Canada and Greece, Miller, Matthews and McClinton, for their individual contributions in the field of secondary education at the Hellenic-American Educational Foundation -Athens College- and role as both teachers and mentors to a generation of future leaders in Greece.

From the cultural scene:

Efthalia Constantinides
For her philanthropy, and that of her late husband Costa, in purchasing a permanent home for the Canadian Archaeological Institute (CAIA) in Greece and dedicated leadership as President of the Friends of the CAIA for many years.

Ion Vorres (posthumous)
In recognition of the vision of Ion Vorres, founder of the Vorres Museum, and his role in the establishment of the Canadian Archaeological Institute in Athens (CAIA) in 1976, and his multiple contributions to Canada-Greece cultural relations.

Finally, Kathryn Lukey-Coutsocostas was honored for her ongoing contributions to promote friendly relations between both the Canadian and expatriate community in Greece and Greek society, and the creation of both the Hellenic Canadian Friendship Association network in Thessaloniki and the Friends of Canada in Athens.

Every year Greece and the Greek Diaspora celebrates its national day on March 25th. This day commemorates the start of the War of Independence.
Read more
Canada

Nikos Tzellos, a young musician from Rhodes, has made it his mission to revive the folk music of his island for the modern era.
Read more
Diaspora

Successful Greek-Americans from all across the West Coast are being featured in a new YouTube series titled "Learn From the Greeks".
Read more
Australia

The first-ever written exam for Greek citizenship is scheduled for May 16, 2021, according to an announcement from the Interior Ministry.
Read more