There are reasons why the most glorious country of ancient times defaulted to the IMF and went bankrupt, becoming the economic pariah of the world in the 21st Century.
IMF put Greece in arrears on June 30 after the country was unable to pay 1.6 billion euros in bundled options. The SYRIZA-led government stiffed the country’s public investors just the way a previous administration under PASOK stiffed private investors, including those in the Diaspora, with 74 percent losses.
After the troika’s continuous and heartless insistence on austerity helped create record unemployment, deep poverty and despair, PM Alexis Tsipras was correct to try to rein that in where it went too far, but he didn’t come up with revenue-raising counter measures as a country can’t survive on good intentions. The point though is that the bailouts – and austerity – wouldn’t have been needed if Greece had been governed properly.
After a failed negotiation with Greece’s creditors, the Greek government is now asking Greek citizens to vote YES/NO on a proposal by Greece’s creditors, although now it has been taken off the table and in a referendum that Athens Bar Association called unconstitutional but, eh, this is Greece where anything goes if you’ve got the money and power.
Anyone who votes no in the referendum better be prepared to have pride for lunch and dignity for dinner because that’s all that’s going to be left with supermarket shelves emptying in the panic that SYRIZA spread.
As the country’s banks have been closed and are under capital controls, a wily pensioner in line at an ATM put it best to describe the insanity SYRIZA has wrought. Asked a question by a TV reporter, he smiled and, in perfect Greek of course, said, “I don’t speak Greek, we’re in Uganda.” Except for the nasty part about killing people, Idi Amin had more of a clue how to run a country than has Tsipras.
Beyond the crimes committed by the Troika, here’s why Greece got to this state, a word it can no longer be called.
11. THE BLAME GAME – Tsipras got exactly one point right in his short term in office, since he won’t be there too much longer no matter which way the referendum goes: it was wild overspending by alternating administrations of PASOK and New Democracy, and then together, along with runaway patronage that bankrupted the country. He didn’t say he’ll finish off what’s left of a body that’s been on life support for years once he pulls the plug on the troika lifeline. Greece’s political parties have taken turns plundering the country and then accusing each other of creating the same mess.
10. LAWLESSNESS – The “Eh, This is Greece” attitude, looking the other way at corruption, partaking in it and pretending there’s nothing wrong with it created the bloated public service, inefficiency and incompetence that has made the country ungovernable.
Along with that is the sense of entitlement that’s okay to break laws you don’t like, which means almost everyone breaks all the laws (five no-smoking bans in 10 years! Fugedaboutit!).. Greeks park on sidewalks, double park the wrong way, go through red lights at will, and simply ignore. That’s why this is Greece today: bereft, broke and still lawless because when there are laws and they aren’t enforced, that’s a textbook definition of lawlessness.
9. CORRUPTION – Transparency International annually ranks Greece among the most corrupt countries, not just in Europe, but in the world and there’s a good reason for it. Nearly everyone is on the take, from tax inspectors to politicians, doctors, lawyers, architects, engineers, clerk, driving inspectors and anyone who has something to gain by making someone else pay for it. When nearly everyone’s corrupt, who’s going to turn them in? Nothing rots a soul faster than corruption, the sense of entitlement that you’re allowed to take bribes and get away with it. 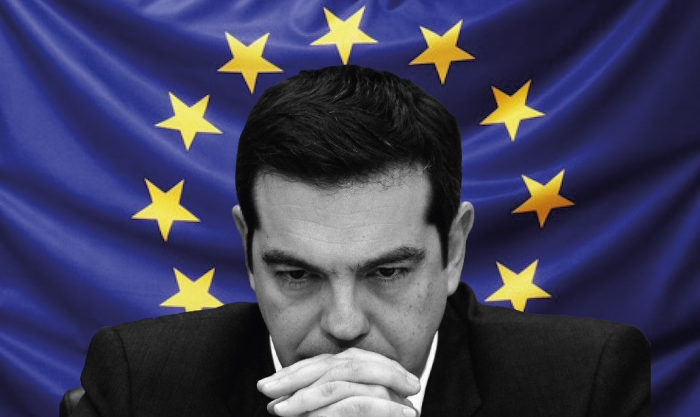 Tsipras said he would root out corruption but has done zero, nothing, nana nana, tipota about it and never will because it’s an accepted way of life.
8. PERCEPTION: The world thinks of Greeks as lazy, corrupt, inefficient, ouzo-chugging, cigarette chain smoking, sun-loving beach layabouts, not unlike in the the movie Shirley Valentine.  While this is generally not true (Greeks have the longest working hours in Europe but many, of course, sit at their desks the whole time), Greeks perpetuate it with their laissez-faire attitude toward everything and now believe it of themselves, which makes it so much easier to do nothing, get away with it, and feel okay about it. You couldn’t hear the word “default” without having “Greece” before it and that became the reality, although it took five years to get there.
7. UNCOMPETIVE/UNPRODUCTIVE – Less than half of Greeks work, nearly 50 percent of those under 25 are unemployed, 25 percent of the estimated Gross Domestic Product is in the undeclared underground black economy, and the government spends 42 percent of its limited funds on social benefits. Too many Greeks spend 40 hours at work but not 40 hours doing work.
Greeks are less productive than their peers, producing only $35 per hour worked compared to $55 in Central Europe. Of 193 countries in the world, Greece ranks 61st in the Ease of Doing Business Index from the World Bank. Of course, it’s easier if you hand over a “fakelaki,” a little envelope stuffed with bribe money.
6. LIAR, LIAR PANTS ON FIRE – Tsipras, Varoufakis and SYRIZA’s puppet mouthpiece Gavriil Sakellaridis are incapable of speaking the truth. They’ve been saying since Feb. 20, when Greece got a four-month bailout extension on condition of coming up with a credible list of reforms (cue the laugh track) that a deal was coming “any day now,” and that there would never be a referendum or capital controls. Now Tsipras says salaries, pensions and savings are safe which means his next step is to pull a Cyprus and seize half or more of what people have left in the bank. That excludes the rich who hide their money in secret accounts in Switzerland, Luxembourg, Lichtenstein, Singapore, the United States and tax havens. And don’t pay taxes on it, of course.
5. DEAD ENTITIES – Remarkably, Greece does have some good companies – mining, pharmaceutical, health and beauty aids, construction supplies, agricultural products, and even state-run enterprises such as Hellenic Petroleum. But the government operates some dead entities, such as the multiple-bankrupt OSE railway system which is useless, runs near empty trains, pays workers five times the $18,000 annual salary of teachers and has almost no value on the open market.
The Troika in 2010 thought Greece could raise $70 billion in privatizations. It has brought in about $3 billion and Tsipras doesn’t want to allow the lease or sale of entities that no one wants and Greece can’t even give away.
4. INJUSTICE – If people believe they are sacrificing for the common good, they are more likely to accept sacrifice, but all Greece does is sacrifice its best and most decent, creating outrage. Pensioners have to wait months for their first check and years for lump sums they earned – unless they work for companies such as Hellenic Petroleum, and then they get it fast and in full. Austerity measures the troika insisted on – and then later admitted were too harsh – backfired, hurt workers, pensioners and the poor and crippled growth. No one goes to jail in Greece it seems except the poor and immigrants, further fostering the belief by most Greeks that the government protects its own. That makes ethical people become unethical and undermines any sense of a nation’s people pulling together because they’re all pulling in different directions.
3. TAX EVADERS – And the biggest injustice, one infuriating enough to make the Dalai Lama want to punch someone, is that while people are paying through the nose – two income taxes, two property taxes, and a Value Added Tax of 23 percent that has crippled restaurants. Tsipras said he wanted to reverse that but hasn’t gone after tax cheats as he said.
Varoufakis, who vowed to “crush the oligarchy,” has been the crushee instead and hasn’t said boo about it since shooting off his mouth in a raft of interviews designed more to show off the red stripe behind his raised lapel.
2. SPEND, BABY, SPEND – Living within your means is just good math because it works but no country lives on its tax revenues: it borrows and borrows and borrows. Greece took that to new limits, its debt at 339.364 billion euros ($374.14 billion), which keeps rising at the rate of 71,470 euros ($79,000) a second. Austerity has failed to rein that in because there’s not enough growth or Foreign Direct Investment.
1. ZELEVOUNAI – Michael Lewis, the Vanity Fair magazine financial writer who came to Greece a few years ago and was overwhelmed at the sheer magnitude of corruption, inefficiency and just don’t-give-a-damn attitude, put it best when he said the bottom line problem is that, “Greeks just don’t trust Greeks” and jealousy and envy rule. The favorite game is Poneeros, in which everyone tries to be more clever than everyone else and isn’t happy until they both win and someone else loses. In this case, it’s the whole country.
(Material from a 2011 column by Andy Dabilis was used in this opinion piece)