Explore TripAdvisor’s list of top ten historic sites and landmarks worth visiting in Greece, based on travelers’ votes. Get your ticket, fasten your seatbelt and follow us on a quick but refreshing trip to Greece.
Acropolis 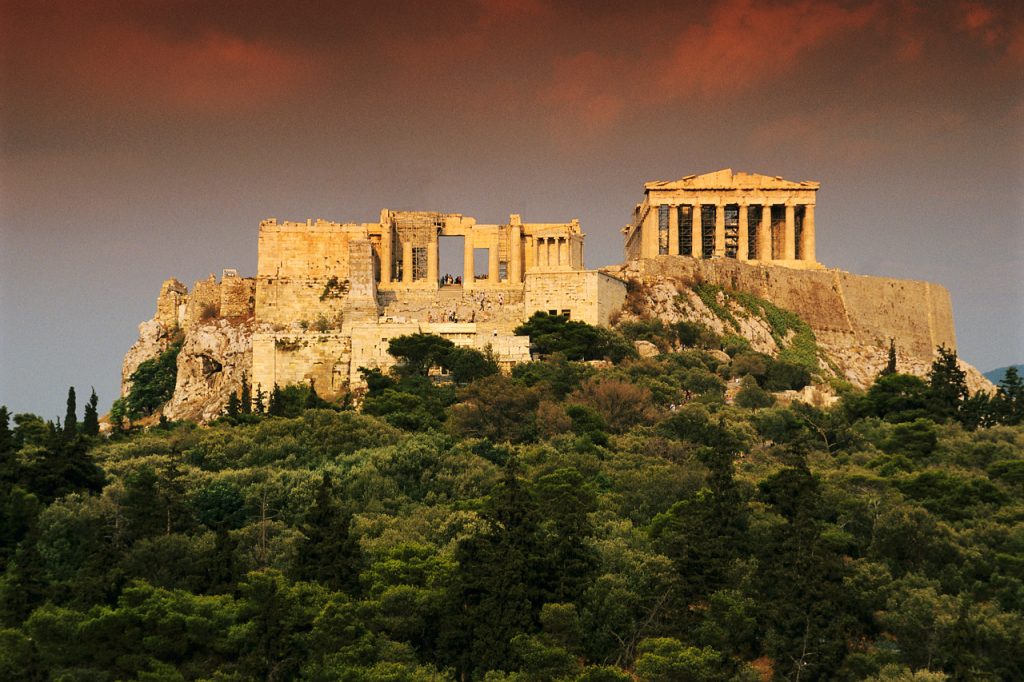 Acropolis is one of the most famous and iconic structures in the world. Situated on a high rocky outcrop above Athens and containing the remains of several ancient buildings of great architectural and historic significance, Acropolis constitutes a real symbol of western civilization and an unmissable destination on any visit to the Greek capital.
Parthenon 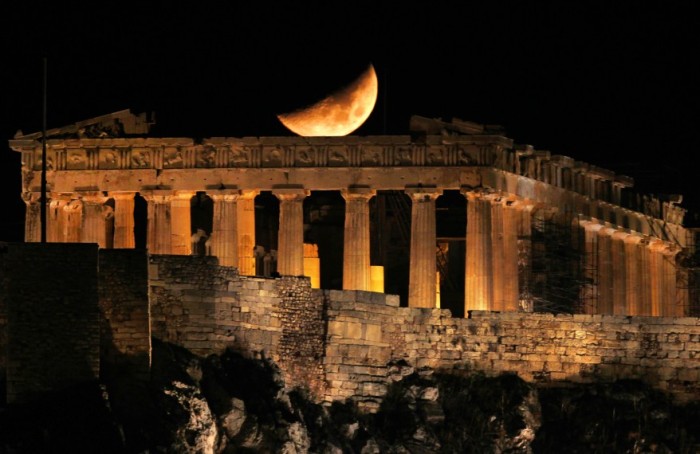 The glorious temple of the Acropolis of Athens, the Parthenon, was built during the “Golden Age of Pericles.” The temple, which was originally constructed to host a statue dedicated to goddess Athena, still dominates Greece’s capital city, being a splendid testimony to the glory the city enjoyed throughout antiquity.
Meteora 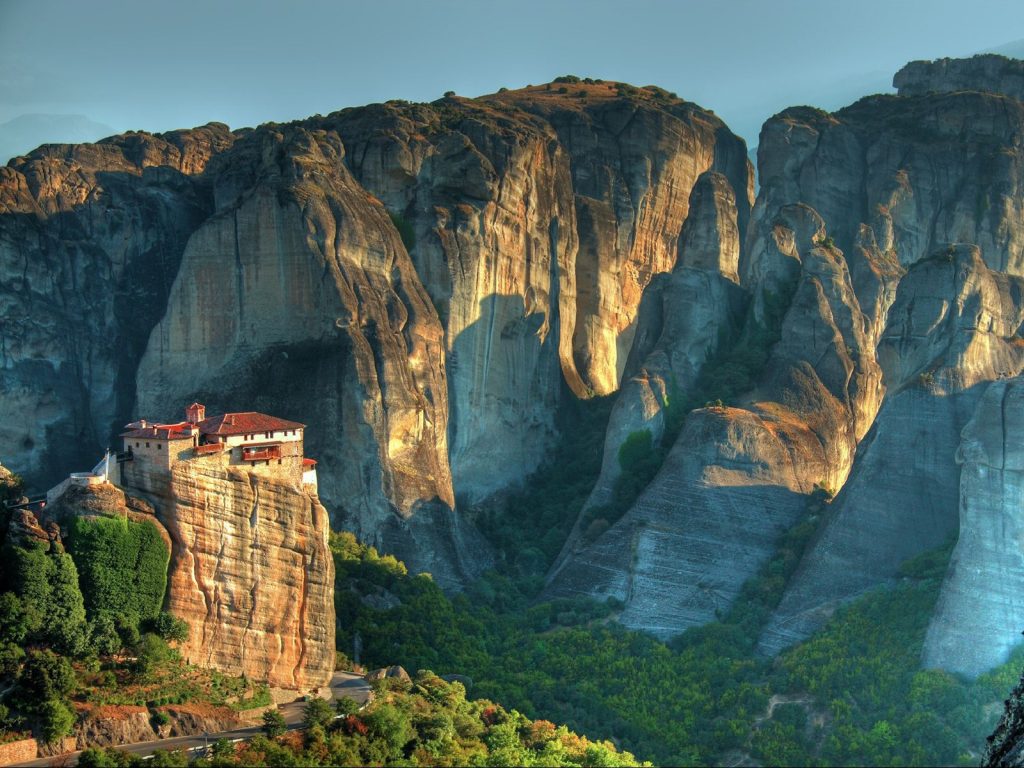 Meteora is a unique destination and not just because it is one of the largest and most important complexes of Greek Orthodox monasteries in Greece. The thing that really fascinates its visitors is that it seems like a village hoisted into the sky by some of the most unbelievable geological formations. Follow intricate stone-carved paths and rope bridges to explore the beauty of nature, feeling at the same time that you are closer than ever to God.
Delphi 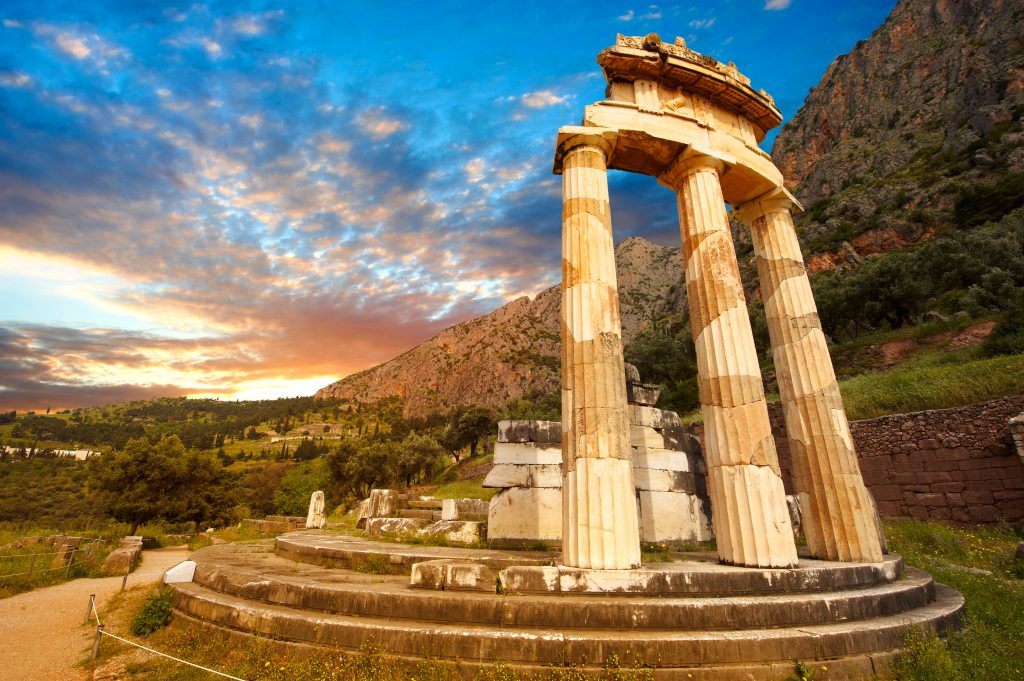 The powerful Oracle at Delphi, seated in the middle of a beautiful temple constructed around 2,800 years ago, was the absolute destination for several powerful rulers and prominent figures from across the Mediterranean world, seeking advice and answers to their complex questions. Delphi was considered to be the “omphalos,” the center of the world.
Hephaestus Temple in Athens 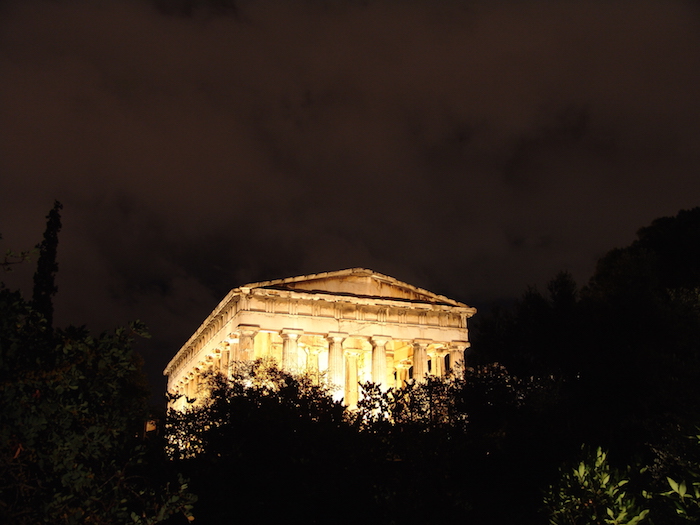 The Hephaestus Temple, whose construction was sponsored by the great Athenian politician Pericles, was built just two years before the Parthenon, overlooking the Athens Agora. The temple was the first in the city to be made of marble and was dedicated to Hephaestus, the Greek god of volcanoes and metalworking, who was the only Olympian god to perform manual labor.
Hozoviotissa Monastery in Amorgos 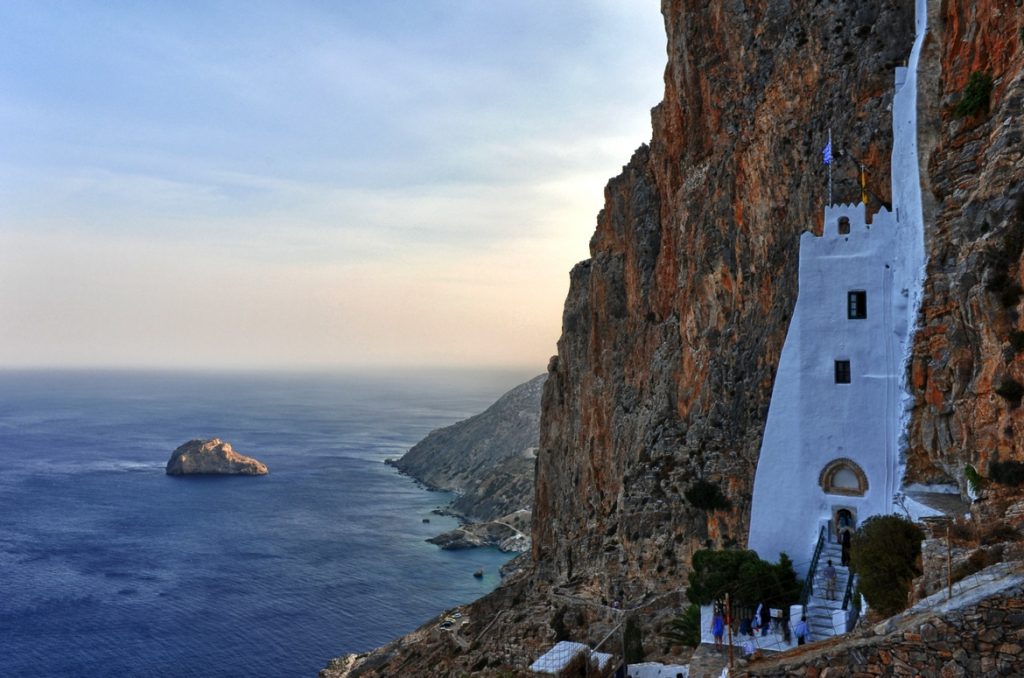 The Monastery of Hozoviotissa in Amorgos, built into the face of a cliff by Alexius I Comnenus in the 11th century, offers an outstanding view of the Aegean Sea’s sparkling blue waters. It constitutes an ode to Virgin Mary, the island’s protector saint. The icon of Panagia inside the monastery is considered to have arrived on a boat from Palestine.
Acropolis of Lindos in Rhodes 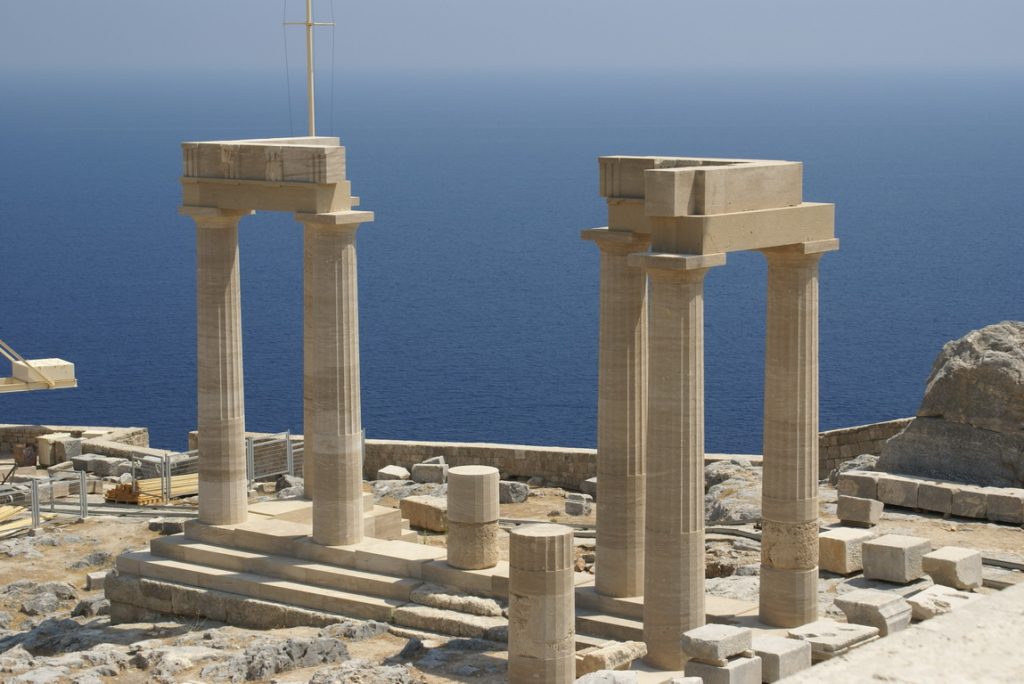 For any history buffs out there, the monumental citadel of the renowned sanctuary of Athena Lindia in Rhodes is well worth a visit. Wear trainers or shoes with a good grip as the climb to the top is slippery and very uneven, and enjoy stunning history together with stunning views. A must see for all tourists.
Spinalonga 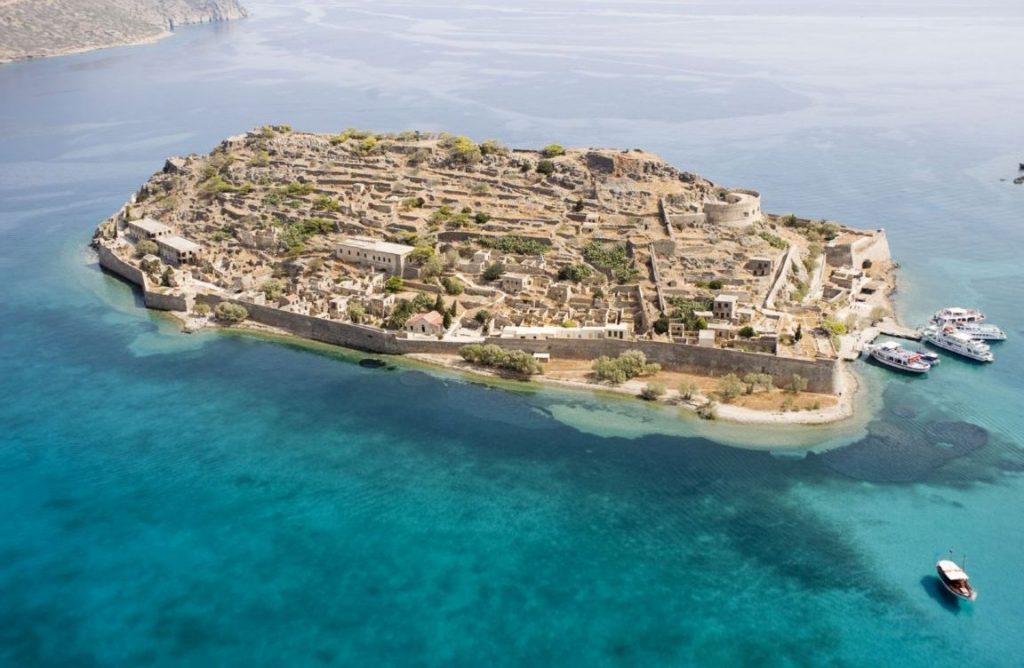 The island of Spinalonga is situated in the Gulf of Elounda, in north-eastern Crete. The island has been used for both defense purposes and as a leper colony in the past while it has gained publicity appearing in novels, television series and a film. Today, thousands of tourists visit Spinalonga by boat from Agios Nikolaos, Plaka and Elounda for a tour of its ruined buildings.
Ancient Theater of Epidaurus 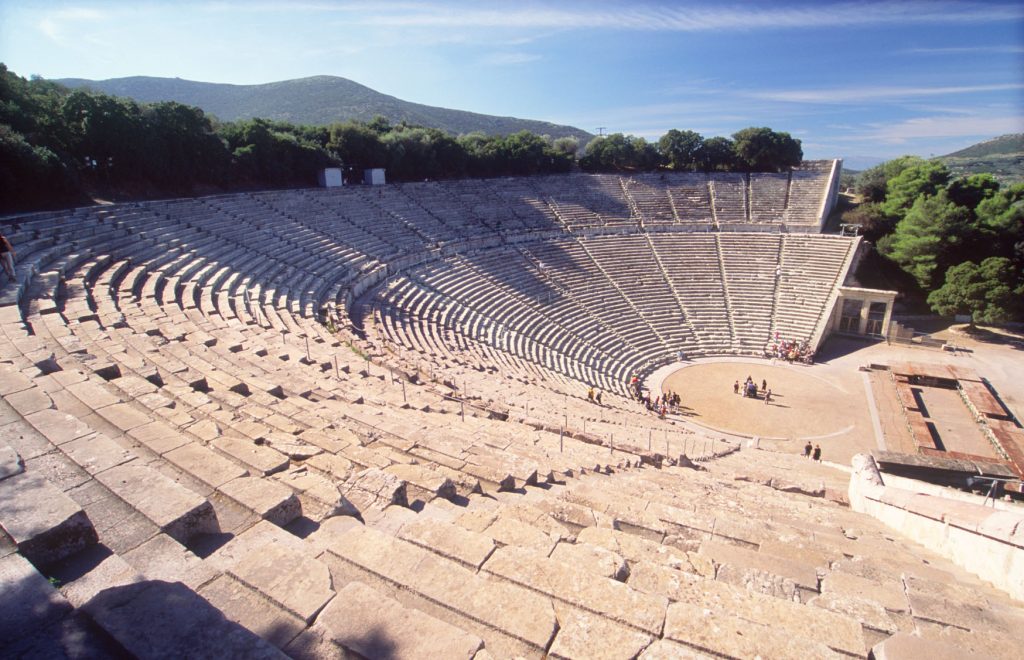 The Ancient Theater of Epidaurus, praised in the second century AD by geographer Pausanias for its elegance and symmetrical proportions, is admired for its exceptional acoustics while it is used for dramatic performances. The ancient theater is located within the archaeological site of the Sanctuary of Asklepios in the Argolis prefecture of the Peloponnese.
Hermes and the Infant Dionysus 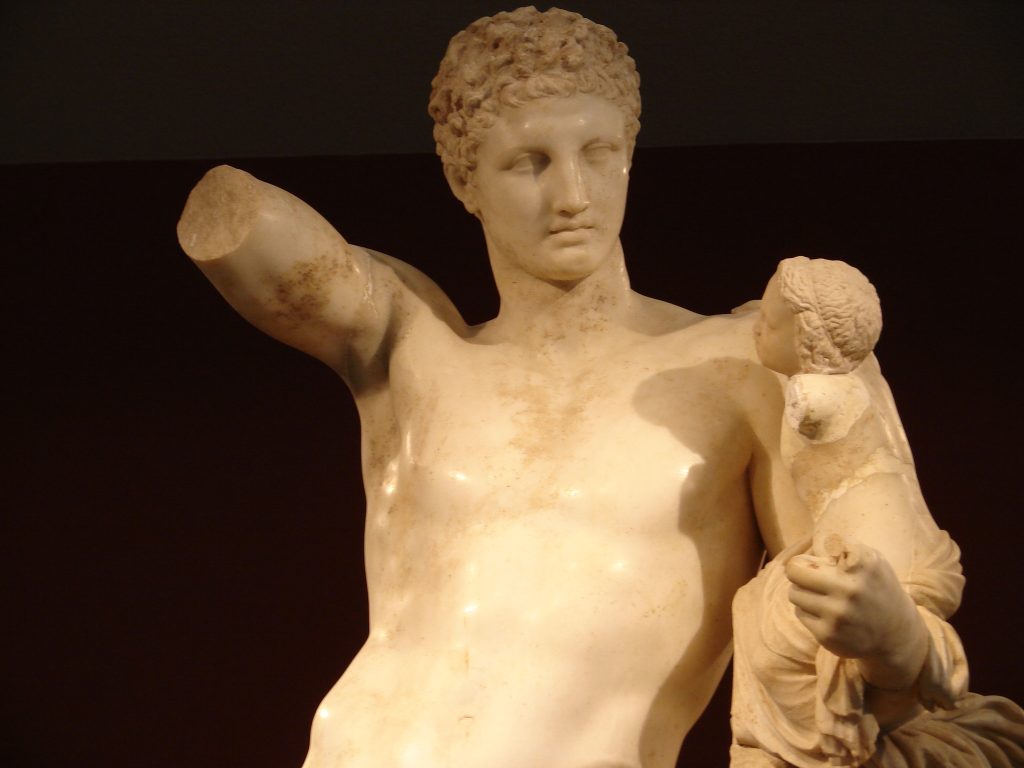 Hermes and the Infant Dionysus, also known as the “Hermes of Praxiteles” is an ancient Greek sculpture discovered in 1877 in the cella of Heraeum in Olympia, now displayed at the Archaeological Museum of Olympia. The marble statue of Hermes carrying the infant Dionysus is characterized by a delicate modeling of forms and exquisite surface finish.