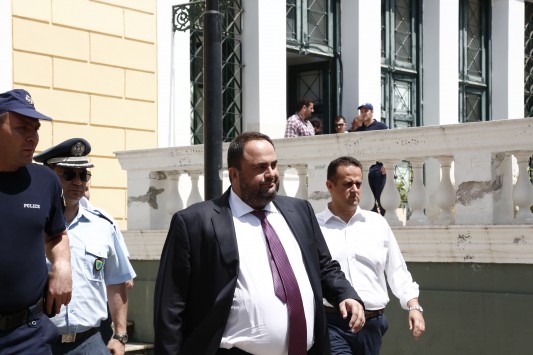 Shipping magnate and Olympiakos FC president Vangelis Marinakis spent seven hours making his plea before the special corruption investigator, Giorgos Andreadis, regarding the organization of an alleged criminal football organization that was controlling the domestic games
Olympiakos’ vice president Savvas Theodoridis, communication director Kostas Karapapas, managing director Ioannis Vrentzos and fifth vice president Takis Agrafiotis were also present during the plea, while several fans of the club arrived outside the courtroom to applaud Vangelis Marinakis.
The special investigator in collaboration with the prosecutor decided to release Marinakis on bail terms. According to his lawyer, Olympiakos’ president has been banned from football as the investigation continues, while he was also ordered to report to police twice a month and pay 200,000 euros in bail. However, he was not banned from leaving the country, which means that he can still travel.
Following the investigator and prosecutor’s decision, Marinakis will have to resign from his post of the club’s president, as well as any other post he may hold in the world of football. However, he will be able to retain his Olympiakos’ shares.
Meanwhile, it is also likely that other Greek football clubs will react to this decision, making official complaints to UEFA about whether Olympiakos should be able to participate in next season’s European competitions.

Turkey is close to signing an agreement with Russia for cooperation in space, which could include sending a Turkish astronaut to space
Greek News