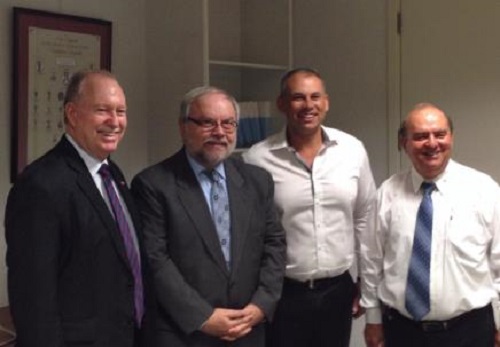 Ambassador of Greece Haris Dafaranos and his wife Eva paid an official visit to Australia’s Northern Territory on June 4 and 5 after an invitation from Chief Minister Adam Giles.

Dafaranos noted that all his contacts with the political and state leadership of the Northern Territory showed their appreciation to the Greek-Australian community, the second-largest ethnic population group, which is distinguished for its dynamism, diligence and social contribution.

The Greek Ambassador also discussed with Speaker Purick for the perspective parliamentary recommendation to form a friendship group with Greece, which does not currently exist. Furthermore, he discussed the possibility of enhancing the newly established Greek Studies Department at the University Charles Darwin with the Education Minister.

On June 6, the couple visited the annual traditional Greek-Australian “Glendi” festival that hosts around 50,000 visitors per year, as well as the Greek-Australian Paspaley Group, based in Darwin.