GRNews
GreekReporter.comSportsBasketballWatch Giannis and Thanasis Antetokounmpo Play Pick Up Ball in their Old... 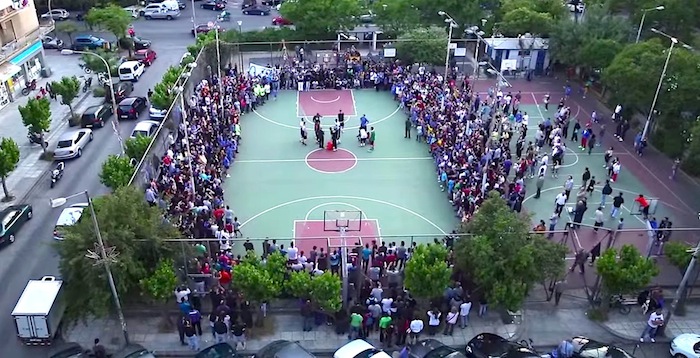 More than 500 hundred kids gathered at Sepolia, a working class neighborhood in Athens, to watch their old buddies, NBA players Giannis and Thanassis Antetokounmpo, play basketball and give hope to their crisis-hit dreams.
After all Giannis and Thanassis who play for the Milwaukee Bucks and the Westchester Knicks, respectively, are considered heroes in their old neighborhood.  It was in Sepolia, where the two Greeks of Nigerian descent managed to become great athletes besides all odds.
The impromptu event started through a tweet by Giannis who made a call for an informal game in Sepolia. And the Antetokounmpo Brothers did not disappoint, wowing the assembled crowd of fans and leaving them in awe with the kind of dunks and shifty skills that we’ve come accustomed to in the NBA.
Check out the video below from the informal game:


Minutes after the completion of the game, Milwaukee Bucks player Giannis Antetokounmpo told the media: “I would like to thank everyone separately who came to see us. We will try to repeat it every year in order to have fun with our friends and remember the old times. I will always miss my neighborhood. Just two days after the playoffs and I am back here. That says everything.”
The two NBA players also posed for photos and gave away signed basketballs to the crowd.