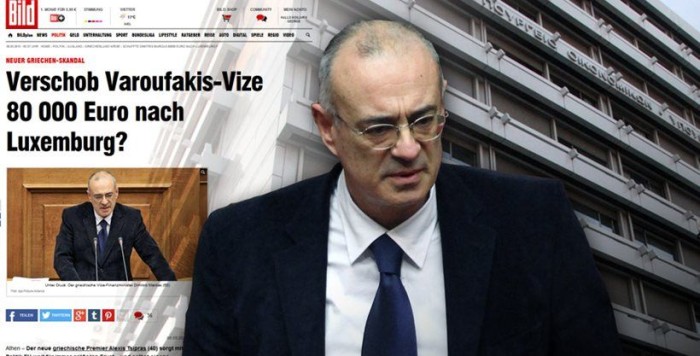 Greece’s Alternate Minister of Revenue Dimitris Mardas filed a lawsuit against German newspaper Bild on Friday in order to restore “the truth, his honor and his reputation concerning the defamatory article that was published on May 6,” he noted.
According to Bild, Dimitris Mardas transferred about 80,000 euros to a bank in Luxembourg in March and after his appointment as minister.  This was the same critical period his radical left government had been urging Greek people to keep their money in the country.
The minister admitted, earlier in the week, that he had sent about 40,000 euros in November or December to pay for his daughter’s tuition fees in Brussels. However, he denied that any money had been transferred abroad since taking up his post after the elections in January.
The accusations first emerged in a Thessaloniki-based newspaper, without, however, revealing the name of the Deputy Finance Minister.