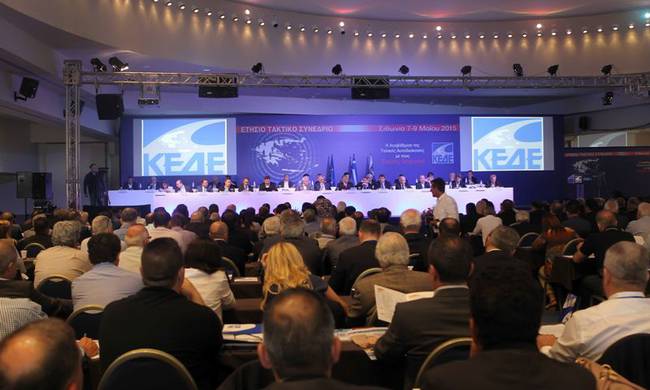 The union representing Greece’s municipalities voted against passing their cash reserves to the Bank of Greece after a government decree that was issued last month.
Giorgos Patoulis, mayor of Maroussi and President of the Central Union of Municipalities of Greece (KEDE), said after the vote over the weekend that mayors object to the decree of handing their money to the central bank unless they get government reassurance that they will get the funds back.
The vote took place during the annual three-day conference of mayors in Chalkidiki. The majority of mayors voted against (185) while 57 mayors voted in favor of transferring reserves to the central bank. The union members who belong to the ruling party did not vote saying that they were not duly informed of the vote.
The decision to tap state entities reserves was taken last month, when the government was strapped for cash to pay its loans and domestic obligations. Regional governors have complied so far, along with several other state entities. Security funds were exempted from the decree but some passed their reserve cash to the Bank of Greece voluntarily.
The northern Athens suburb mayor noted though that municipalities will do their duty if the situation were to become critical. “If the government publicly states that the country is in trouble… we commit to immediately hand it over and, in order to save the country, also to hand over mayors’ salaries,” Patoulis said.
Last week Thessaloniki Mayor Yiannis Boutaris angered many of his counterparts by transferring his municipality’s cash reserves to the central bank. He stated that through his action he supports the country, even though he disagrees with many government policies.