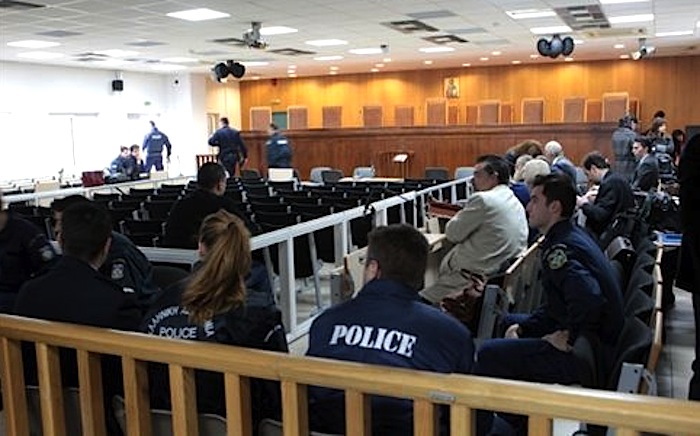 The historic and unprecedented trial of party leader Nikos Michaloliakos and the leadership of his extreme-right Golden Dawn party – the first time since World War II that a Parliamentary party in Greece or on a global level is charged as a criminal organization – is scheduled to begin today, in a specially adapted courtroom in Korydallos prison.
The Appeals Court justices presiding will be called on to make a historically important decision and judge whether Golden Dawn is a legitimate political party or a Nazi-type criminal group operating under the guise of a political party.
According to Appeals Court chief prosecutor Isidoros Dogiakos, the founding of Golden Dawn was an “abusive exercise of the right to found a party” since it did not serve the operation of a democratic system of government and sought to impose its goals through violence. They judges are also expected to deliver justice for the victims of the defendants’ actions and decide whether these were the targeted actions of a structured and fully coordinated criminal group. Among others, the court must decide if these acts were carried out “in implementation of the founding ‘principles’ and goals” of Golden Dawn or whether they were isolated incidents not connected to directions given or choices made by the party.
The choice of the Korydallos courtroom as a venue has sparked controversy with reactions from the local authority, which fears the trial will seriously disrupt the municipality and a large number of schools in the area. Complaints were also voiced by lawyers and the media, who said the venue is too small to enable them to properly do their job.
Once it begins, the trial is expected to last roughly a year and involves 69 defendants, more than 100 defense lawyers, numerous attorneys representing civil suits, as well as hundreds of witnesses. Among the 69 defendants are all Golden Dawn MPs of the previous Parliamentary group.
Three of the defendants do not face charges for the key offense in the case – the murder of musician Pavlos Fyssas – but only secondary charges. They include Margarita Mikelatou, the wife of the main suspect of Fyssas’ stabbing, Giorgos Roupakias, who is only charged with perjury, Theodoros Stefas, who is charged with illegal weapons possession and Anastasios Hilios, who is charged with weapons possession as well as with dealing and possession of drugs.
Also charged are two former Golden Dawn MPs, Stathis Boukouras and Chrysovalantis Alexopoulos, who later denounced the party and its practices during the course of the investigation, resigning from its Parliamentary group to become independents. In spite of this, Boukouras is still charged with leading a Golden Dawn ‘attack squad’ in Corinth, responsible for racist attacks, while Alexopoulos is charged with “public hate rhetoric” against the democratic state and groups targeted by Golden Dawn as “racial or political enemies.”
The judicial investigation into the party’s activities was launched after Fyssas’ murder by Roupakias on September 18, 2013, during an attack also involving other Golden Dawn supporters.
An investigation of the incident showed that party members had coordinated their actions, instructing Roupakias to go to the location where Fyssas and his friends could be found.
Acting on a letter sent by then Public Order Minister Nikos Dendias, Supreme Court Prosecutor Efterpi Koutzamani ordered that the preliminary investigation be broadened to include a series of racist attacks that had been reported as isolated cases throughout the country. This led to a report by Supreme Court Deputy Prosecutor Haralambos Vourliotis describing Golden Dawn as an “active Nazi-type criminal organization operating since 1987 with a military structure, hierarchy and branches across the country.”
Vourliotis said party leader Michaloliakos acted as “Führerprinzip” and Christos Pappas as second in command, while violence was Golden Dawn’s central message. Michaloliakos and leading party members were then arrested in September 2013 and many of them were remanded in custody. The case comes to trial with an Appeals Justices’ Council indictment that also includes the minority opinion of Appeals Justice Nikos Salatas, who presented the case, raising questions about whether the criminal organization charge is supported by the evidence presented.
In addition to Fyssas’ murder, the trial is also expected to look into the party’s role in the murder of a Pakistani worker, attacks on Greek Communist Party (KKE) members, attacks on Egyptian fishermen, as well as various other attacks across the country. The prosecution’s proposal stresses the party’s Nazi-type structure, Michaloliakos’ leading role and the fact that its action peaked after 2012 when Golden Dawn entered the Greek Parliament.
(source: ana-mpa)