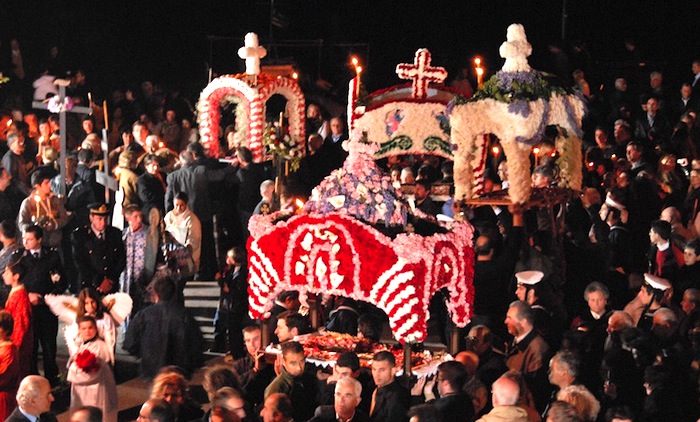 In Good Friday, millions of Orthodox Christians commemorate the events leading up to Jesus Christ’s crucifixion. For the Greek Orthodox Church, Good Friday is a day of mourning. The drama of Jesus Christ’s death is followed with great devoutness. The icon of Jesus is taken off the cross, wrapped in linen and put it in the Epitaph, symbolizing his tomb.
Late at night, the Epitaph is carried across every Greek town, village or neighborhood, followed by a procession of faithful. In some occasions, a band or choir follows the procession and plays or sings solemn music to express people’s sorrow. The Epitaph is followed by cantors, clergy members, women bearing myrrh and altar boys carrying the liturgical fans. Throughout the procession, people scatter flowers and perfume on the Epitaph, while holding lit candles in their hands.
In Athens, women used to clean the streets just before the Epitaph procession passed by and as soon as the procession arrived, they would stand at their doors holding a roof tile containing a small piece of charcoal and incense. Meanwhile, on the evening of Good Friday, in Nafpaktos, western Greece, the crowd, both locals and visitors, follows the Epitaph procession, passing through the port where locals light torches and place them across the castle wall. Torches are also placed in the middle of the port, forming a large cross and offering a unique and spectacular spectacle to the people following the procession.
Meanwhile, several people in Greece drink vinegar on Good Friday, while in Crete locals boil snails and drink their juice, which is very bitter. In Koroni, Peloponnese, people do not eat anything during the whole day. Also, in many Greek villages, the men refrain from doing any manual work and especially using nails because it resembles the way Jesus died.
In Naxos, people do not kiss on Good Friday, because Judas betrayed Jesus with a kiss. The women gather to clean the churches and decorate the Epitaph before following the procession.
In Syros, Easter is celebrated with great amity. Both religious communities, the Orthodox and the Catholic, commemorate the death of Christ together. The Cyclades is perhaps the only region across the world where Catholics celebrate Easter together with the Orthodox. Two religious worlds meet at the island’s main square to celebrate Good Friday with devoutness and mutual respect.