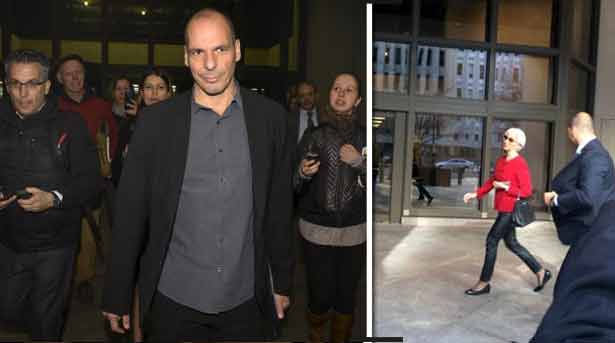 International Monetary Fund Managing Director Christine Lagarde suggested to Greek Finance Minister Yanis Varoufakis to raise VAT and cut pensions, according to DPA news agency.
Varoufakis and Lagarde talked for 2.5 hours on Sunday in Washington, DC and the Greek finance minister assured the IMF chief that Greece will make its 450-million-euros payment to the IMF on Thursday.
On her part, Lagarde said that “the Fund remains committed to work together with the authorities to help Greece return to a sustainable path of growth and employment.” She also added that since Greece is a founding member of the IMF, the organization will aid Greece. Both officials said that the meetings between the two technical teams will resume on Monday (today).
In a report citing German agency DPA, several Greek newspapers wrote that Lagarde suggested pension cuts and a raise in value added tax, two measures that the Greek government is adamant not to implement. Varoufakis has often expressed that more austerity measures will be counterproductive for Greece.
According to the report, the IMF is a tough negotiator and the rest of Greece’s creditors are far more flexible. Citing sources inside the Greek finance ministry, Athens is trying to persuade IMF to show more leniency in the conditions for further financial aid.
The Greek finance minister said that negotiations between the technical teams of the two sides will continue on Monday and clarified that the reason the IMF staff left Athens was because of the Easter holidays and not because there was a disagreement or frustration, as it has been reported last week in German magazine Der Spiegel.
According to a report published in iefimerida.gr, the meeting between Lagarde and Varoufakis was an emergency meeting initiated by the fund’s managing director after last week’s statements by Greek Prime Minister Alexis Tsipras that the cash-strapped government would pay salaries and pensions first before it makes the payment to the IMF.