TechNews
GreekReporter.com Greece Half a Million Immigrants Standing By at Greek Borders

Half a Million Immigrants Standing By at Greek Borders 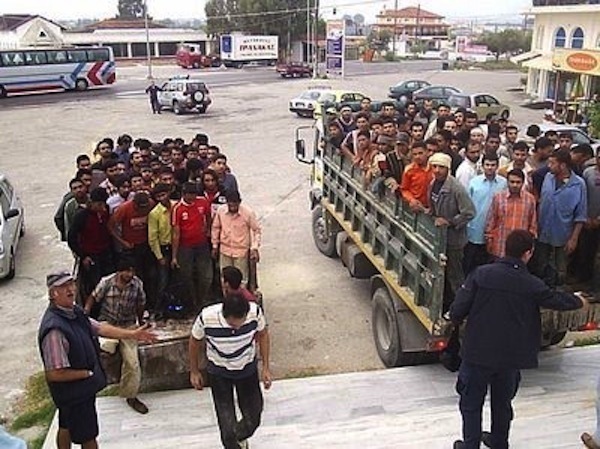 About 500,000 immigrants mostly from Syria are waiting in Turkey to enter Greece, according to information by the Greek secret services.
At a time when the citizen protection ministry decided to reduce by 30 percent the border guard forces in Xanthi, Orestiada and Drama, traffickers are standing by in Turkey waiting to smuggle into the country about half a million immigrants. In the three border crossing points there are migrant detention centers with a capacity of 1880 people, currently housing 463 detainees. The number of guards was reduced since the number of detainees decreased.
According to border guard authorities, traffickers are waiting for the floods to subside so they can bring the migrants through. “The floods will eventually subside and the weather shows this will happen very soon. Pressure in the land border will be very strong. One wonders how migration points will respond with at least 30 percent staff reduction,” the General Secretary of the Panhellenic Federation of Border Guards Charalambos Pantelidis told Eleftheros Typos newspaper.
A part of the border fence in the Evros region has fallen due to heavy rainfall and has not be restored yet. Border guard authorities believe that there will be an influx of illegal immigrants from that point as soon as the floods subside. They say that the particular entry point might replace the “sea border” of the Aegean, from where an estimated 400-500 people enter Greece daily.
The vast majority of immigrants who want to cross the Greek border are from Syria and have left their country because of the war. Authorities say that most of them use Greece as a transit country before they move further in Europe. The cost of a fake passport starts at 2,000 euros and can go up to 5,000. However, most of them are trapped in Greece because of migration treaties signed by European Union member countries who don’t allow them to leave Greece once they enter.