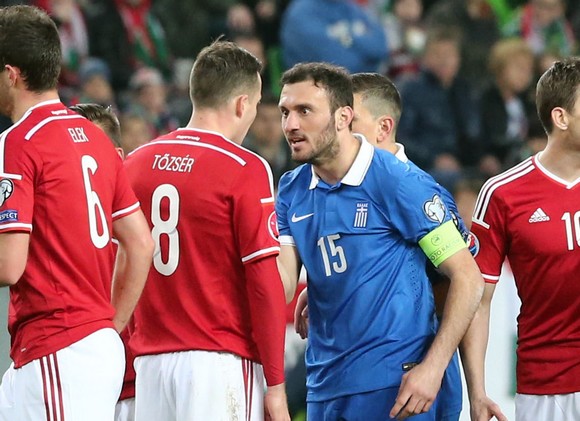 Hungary and Greece produced a time-wasting game and a goalless tie in which both teams proved they lack what it takes to make it through to the Euro 2016 finals in France the following summer.
Greece presented a better side compared to its previous Euro qualifying encounters yet still not one that deserves to be atop of the group and definitely not one that signifies that this team reached the last 16 of the 2014 World Cup.
Against a fearful and unimaginative Hungary, Greece missed a grand chance to turn the tables around and get back to fighting for the ticket to France next year.

Coach Sergio Markarian brought a rationally formatted team on the field with Orestis Karnezis protecting the goal, while Stafylidis and Torosidis took on the left and right back side respectively. In the back center Stelios Manolas alongside Sokratis Papastathopoulos with Kyriakos Papadopoulos right in front of them connecting the back four with the mids. Andreas Samaris and Panagiotis Kone were responsible of the center midfield positions, while Lazaros Christodoloupoulos as a left winger and Giannis Fetfatzidis as a right one gave help to the sole striker, Klaus Athanasiadis.

Hungary’s coach, Pal Dardai, seemed to be content with a home tie against the Euro 2004 Champions and it was evident from the game’s kick-off that Greece would have to break a double wall to put the ball in the net. After all, the were no clear “classical” chances from the Greek side, just shots off target and weak headers just wide of the post. The first half came and went, leaving nothing to remember it for, with both teams struggling to come forward and create a descent attack. With the beginning of the second half however, Greece took over, keeping the ball in its feet, looking to create chances but unable to do so. By the 70th minute, the blues´ momentum fell through and as a result the Magyars tested Karnezis´ reflexes with two well executed shots. Kostas Katsouranis answered back with a soft shot from just inside the box in the 89th minute and in the remaining time, both teams had no energy left for that, much-needed from both sides, victorious goal.
The next Euro qualifying Greek match is scheduled on June 13 against the Faroe Islands in Torshavn.