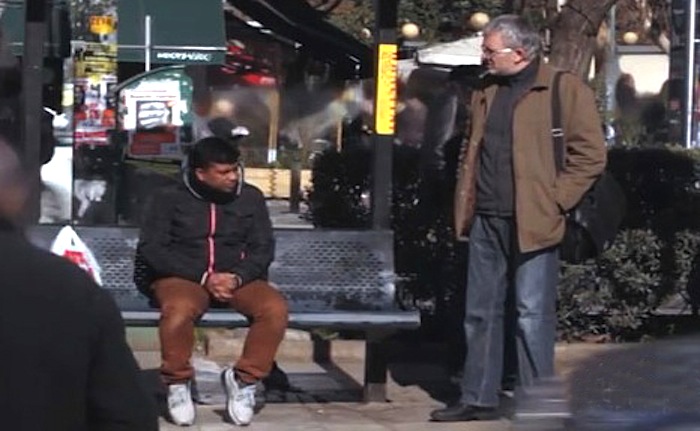 How racist are Greek people? How do they feel about migrants? Action Aid, an international non-governmental organization whose primary aim is to work against poverty and injustice worldwide, carried out a social experiment in Athens to determine Greek people’s reaction to racism on the occasion of International Day for the Elimination of Racial Discrimination.
The social experiment took place on February 20, in central Athens. Two actors, one from Bangladesh and one from Greece, played the roles of a migrant and a Greek citizen.
The migrant from Bangladesh was the victim of a verbal attack from the Greek man, while they were both waiting for the bus. The migrant was sitting on the bus stop bench when he was approached by the Greek man who started insulting him, making racist comments and demanding from him to stand so someone else could sit in his place.
More than 200 people unknowingly participated in the experiment which was repeated 22 times over the course of eight hours.
The results were optimistic. Most Greeks appeared to have a strong reaction against the man who was making the racist comments, while several people even defended the migrants.
In four incidents the people at the bus stop were indifferent to the scene they were witnessing, while on two occasions they showed racist behavior. However, on 15 occasions they defended the migrant.
For over 40 years, Action Aid has been working to help people who are discriminated, helping them fight for their rights.