GRNews
GreekReporter.comGreek NewsEconomyFormer Greek FinMin Papakonstantinou in Court: I Am Not Guilty

Former Greek FinMin Papakonstantinou in Court: I Am Not Guilty 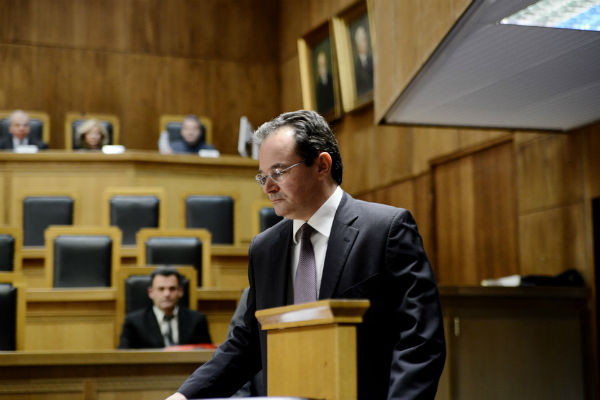 Greece ‘s former Finance Minister Giorgos Papakonstantinou declared self “innocent” in his apology today before the Special Court, where he is being tried for the infamous Lagarde List scandal. Moreover, he expressed his displeasure for his party’s (PASOK) stance over the case, saying that he has been isolated and “thrown to the dogs.”

The former Minister’s parliamentary immunity was lifted so he could stand trial on accusations that he removed the names of three relatives from a list of Greeks with deposits at the Geneva branch of HSBC, which contained some 2,000 names in total. The trial has so far lasted just over two weeks.

In his hearing today, he also railed against current PASOK leader Evangelos Venizelos, both for his handling of the case and the fact that he did not defend him while, as he described, in other corruption cases he would do so in Parliament. Papakonstantinou stressed that he made no distortion and no interference on the list, characterizing the whole case as a setup. “I am being judged every day,” the former Minister said, explaining that populist attacks against him are an everyday phenomenon. “They are saying that the Minister who signed the Memorandum and cut salaries and pensions got hold of the list and did not collect money [from those in it],” he described. Regarding the investigation completed prior to the trial, he said that his relatives and close associates, who have been cleared of all charges, were brutally reviled.