Another One of Xeros’ Alleged Associates Arrested 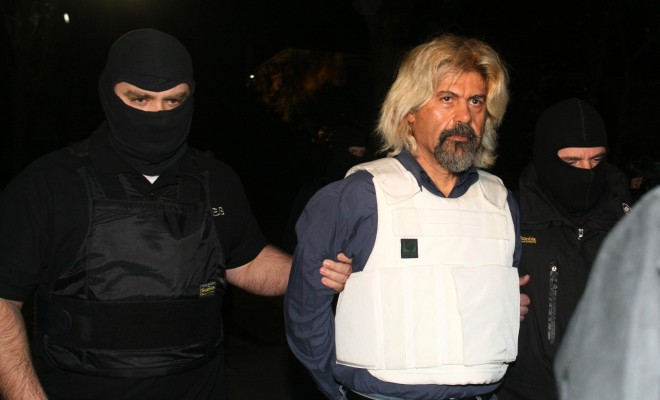 Greek police have arrested another person involved with Christodoulos Xeros and the “Gorgopotamos” operation that was being organized by Greek terrorist organization Conspiracy of Fire Nuclei members in collaboration with criminal prisoners. The operation involved an attack in Koryadallos prison.
The arrested person is a 36-year-old woman who acted as a liaison between Chirstodoulos Xeros and other people involved in the case, as well as between imprisoned Conspiracy of Fire Nuclei members and their comrades outside of prison.
According to Greek police, the 36-year-old woman met with leading members of the terrorist group in prison and carried letters, as well as other packages, for example, she allegedly transferred a large amount of money to Xeros’ associate Angeliki Spyropoulou. The woman will be led before the public prosecutor later today, March 1, 2015.
Furthermore, according to Hellenic Police Chief Lieutenant Dimitris Tsaknakis, Greek authorities also arrested a 39-year-old man from Galatsi, Athens and a 36-year-old man from Agios Dimitrios, Athens. Both men had managed to stay under the radar and they had never bothered the Greek authorities, however, they had close relations and frequent contact with imprisoned Conspiracy of Fire Nuclei members.
The Greek police anti-terrorist unit is conducting an investigation which brought to surface new information regarding the terrorist group. Conspiracy of Fire Nuclei had turned Korydallos prison into their new headquarters, where they would organize terrorist attacks, while they dealt electronic equipment and money to their free accomplices.
The 32-year-old man who was arrested by Greek police officers appears to have played a key role in handling and transferring the equipment, while his 39-year-old accomplice is considered to be one of the terrorist organization’s oldest members.