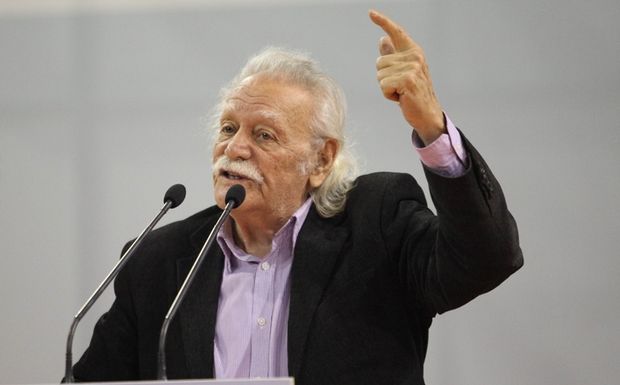 Historic member of Greek Left, World War II resistance participant and SYRIZA MEP Manolis Glezos heavily criticized the Greek government for the Eurogroup negotiations handling as well as the agreed outcome. In a sharp statement published on the website of the Movement for Active Citizens, he founded, Mr. Glezos apologizes to the Greek people for contributing to this “illusion,” as he characterized the negotiations from which many expected that Greece will have more gains. Furthermore, the SYRIZA MEP expresses his disappointment about the way the newly elected leftist party handled the process, while he calls the party members to decide whether they accept this situation or not.
The new deal reached between the Greek government and its European partners on Friday entails a four-month extension of the loan agreement without new austerity measures and a commitment that no unilateral actions will be taken.
Manolis Glezos’ article is as follows
Renaming the Troika into “Institutions,” the Memorandum of Understanding into “Agreement” and the lenders into “partners,” you do not change the previous situations as in the case renaming “meat” to “fish.”
Of course, you cannot change the vote of the Greek people at the elections of January 25, 2015.
The people voted in favor of what SYRIZA promised: to remove the austerity which is not the only strategy of the oligarchic Germany and the other EU countries, but also the strategy of the Greek oligarchy.
To remove the Memoranda and the Troika, abolish all laws of austerity.
The next day after the elections, we abolish per law the Troika and its consequences.
Now a month has passed and the promises have not turned into practice.
Pity. And pity, again.
On my part, I APOLOGIZE to the Greek people because I have contributed to this illusion.
Before it is too late, though, we should react.
First of all, SYRIZA members, friends and supporters at all levels of organizations should decide in extraordinary meetings whether they accept this situation.
Some argue that to reach an agreement, you have to retreat. First: There can be no compromise between the oppressor and oppressed. Between the slave and the occupier the only solution is Freedom.
But even if we accept this absurdity, the concessions already made by the previous pro-austerity governments in terms of unemployment, austerity, poverty, suicides have gone beyond the limits.
Manolis Glezos, Brussels February 22, 2015
Maximos Mansion: Glezos might not be well-informed
“It is possible that Manolis Glezos is not well-informed about the harsh and painful negotiations that are still going on. A negotiation for the recovery of the Greek peoples.” This short statement was issued hours after Manolis Glezos published his article.