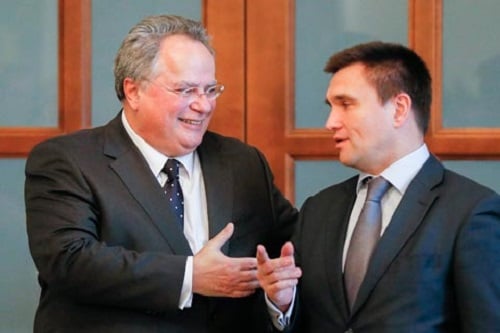 On Thursday, February 19, Greek Foreign Minister Nikos Kotzias visited Kiev, Ukraine to meet with the country’s Foreign Minister Pavlo Klimkin. Kotzias expressed his support towards Ukraine’s sovereignty, as well as the need to reinforce talks regarding the ceasefire between Ukrainians and pro-Russians rebels, as it was agreed last week.

During his meeting with his Ukrainian counterpart, Nikos Kotzias noted that the only way to solve such political disputes is via diplomacy and negotiations. “In international politics, sanctions are not a tool for expressing anger or sentiment,” he stated in regards to the restrictions that have been imposed on Russia by the European Union, after the Ukrainian crisis.

Furthermore, Kotzias offered Greece’s help to the Ukrainian people so that they can deal with the humanitarian crisis they are currently facing. The minister mainly offered medical help to wounded citizens, while he also noted that Greece would be able to provide knowledge on constitutional and rule of law issues.

On his part, Ukrainian Foreign Minister Pavlo Klimkin thanked his Greek counterpart for the aid offer and support on the matter of sovereignty.