Greece to Submit Loan Agreement Extension Request, Differentiating it From the Memorandum 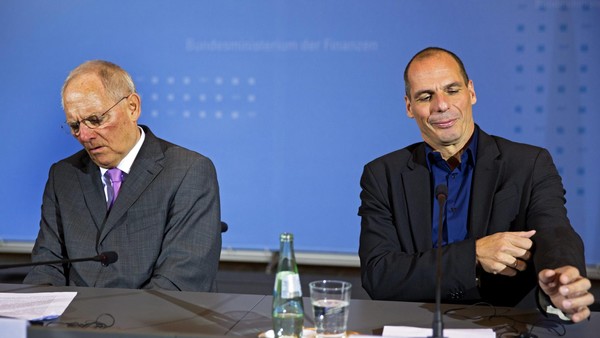 The Greek government has confirmed its intention to apply for an extension of its loan agreement tomorrow morning in order to avoid the danger of running out of liquidity by the end of February -when the current bailout program was planned to be completed- with unpredictable results for the country’s economy. As government spokesperson Gavriil Sakellaridis has said earlier today in an interview with “SkyNews,” Athens will not cave in to demands to extend its existing bailout program. “We believe the terms of the bailout cannot continue by any means,” Sakellaridis underlined. Tomorrow’s request will come a day later than expected, as the Greek government is fine-tuning its proposal.

Greece’s request to the Eurozone aims at a six-month extension of the loan agreement, preventing the country’s current deal with its loan partners from expiring at the end of February and giving it time to negotiate a new bailout, although this development has caused Germany’s -and its Finance Minister Wolfgang Schaeuble– firm reaction, as according to Berlin officials such a deal is already on offer but Athens has to stick to the terms of the Memorandum in order to achieve a loan extension. On the opposite, the SYRIZA-led Greek government has declared it does not accept ultimatums and will not request a bailout program extension. “We are considering the possibility of extending the loan agreement, completely differentiating it from the bailout program (Memorandum),” government sources have declared. “We are not taking even a single step back from our basic promises to the Greek people, not a single step back from our pre-election promises,” Greek Prime Minister Alexis Tsipras highlighted during a Parliament speech on Tuesday.

The war of words between Athens and Berlin was intense today, while Schaeuble has warned that Greece cannot separate its loan from its bailout commitments. At the same time, European Commission Vice President Valdis Dombrovskis appeared adamant today, repeating that Greece must stick to the conditions of its existing bailout. Schaeuble dismissed the Greek gambit, telling German broadcaster ZDF that “It is not about extending a credit program but whether this bailout program will be fulfilled,” calling Athens to give a “yes or no” answer. As a reply, Sakellaridis highlighted that “we are coming to the table to find a solution. We will not back down on certain points that we consider red lines. The Memorandum died on January 25 (after the snap general elections).”

Greek yields fell today and, as Reuters stressed, investors are encouraged the country might win some respite for its banks from the European Central Bank (ECB), which is expected to approve emergency funding for Greek banks that have lost deposits at an unnerving rate, easing selling pressure on the country’s assets. “The market is taking the view that an agreement between Greece and EU is more likely than not, hence fears of a Greek exit have dissipated somewhat, so we are seeing appetite for riskier markets including peripherals,” RIA Capital Markets strategist Nick Stamenkovic told Reuters.

When asked what his government will do if Germany does not back down from its hardline position to extend the entire program and not solely the loan agreement, Sakellaridis told Greek “Antenna TV” that “the government hopes that it will not come to such a point and it is working for such a scenario so that it will not find itself again in a situation similar to the last Eurogroup.”